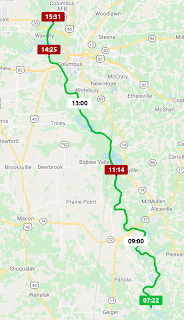 No, we're not at the campground, but anchored near it. They have really nice dinghy docks. The campgrounds are spectacular -- a shame we didn't find this back when we owned an RV.

We got a routine: up early, make coffees, walk the dog, and weigh anchor. After we got settled last night another boat joined us at Sumter Creek. Almost insulting, having to share our space with any other boater. We've everything to ourselves all this time.

They were a fast boat and, we believe since it was 2 guys, a delivery. They beat us out by and hour or so.

We had 2 locks today. The first, Devill, was opening for us as we approached. The second, Stannis, we had to stand station for for about 10 minutes. There was extra radio chatter there which made us think they were doing some minor repair or painting.

When we started the day we thought we were going to stop at the Columbus Marina. We'd been to it before so we knew there wasn't much there. Russ found this anchorage spot mentioned with positive remarks, so we thought it might be a better place to spend the night.

The trip was uneventful. Again, we had the rivers (and the locks) to ourselves. I think we passed 2 tows headed down river the entire day. We're beginning to think we're doing something wrong.

Side Rant: Mayflies. They don't sting, they don't bite. They just make a frickin' mess. Seems like there is a litany of bugs that do just that: lovebugs, Formosan termites, and fuzzybills (we ran into those in Belhaven). These things have just a few days to repopulate themselves, so they swarm like crazy. Mostly, they hatch, fly around, land on the boat, and die, leaving us to do the cleanup. Oh, and feed the fish.

Posted by Jax Robertson at 7:22 PM