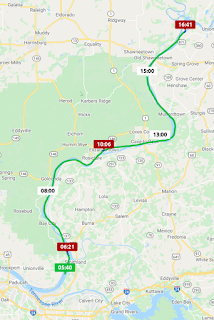 Another 92 degree day. Hopefully the last or a week or so.

Everything up to this point we'd done before. Starting today, it's all new. We haven't truly explored "new waters" since the loop.

Up crazy early, 5 am, and not for any good reason other than we left the windows open (since the low was in the mid-60s) and that let the sunlight in early. Russ immediately took a look at the lock ahead, Smithland. It looked open. He called to confirm. Yep, come on down.

Before we even had coffee we hoisted the anchor and headed out. The lock was about an hour away. I heard them talk to a down-bound PC. As soon as he was in I hailed the lock to let them know we were coming. We assumed we'd lock through once the down-bound was out of the chamber. Took a while to get the lock to listen to us, but we locked through with ease, only a 27 foot raise.

We are headed upriver for the rest of the trip to Pittsburgh. At the moment there is about a 2 knot current against us (water will be high for the next few days), so we were poking at around 6.5 knots. The was a tow behind us, going about 7 knots. I really don't want to be passed by a tow so we kept the spurs to her.

By 10 am we're reached Elizabethtown. The place is largely famous for the E-town River Restaurant, which is built on a floating platform over the river. They didn't open until 11 for lunch. But we were able to dock the boat with ease, walk a dog (who did NOT get walked last night, and needed it), lay down for a few minutes, then go get an early lunch. It also gave time to the Speed Racer tow behind us to pass. Side note: not a huge fan of catfish but this place was amazing! We had catfish, hushpuppies, fried okra, potato wedges, and coleslaw. Just wonderful!

The owner came by and asked where we were headed. We said Pittsburgh. He gave us the strangest look. Then I volunteered, "For the summer. We'll be back this way when we go back." He asked, with some shock in his voice, "To Florida?" He went on to say he wanted to start a paddlewheel restaurant but the thought going just a couple hundred miles was terrifying. Russ mentioned we'd done the loop, and that's a nearly 6000 mile trip. He was floored.By noon we were on our way again. There are only 2 anchorages that are marked between here and the next lock; one was very close and the other far away. We opted for the far away one.

We dropped anchor off of Wabash Island around 5 pm. From here we can see the next lock but we have to go the long way around the island to get to it tomorrow. If it works out we'll be in a marina in Evansville around noon.

Posted by Jax Robertson at 6:06 PM