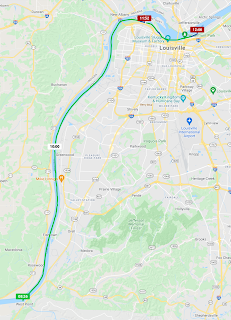 We learn all the time while on the water. We learned quite a bit about the rivers yesterday and today.

1. About 3/4 of the way through the day more debris filled the pool. We passed that off as "getting closer to the lock" but it was still a bit far. Even as the day started we're 20 miles from it.
2. About that same time we noticed our speed decreased. We started the day running over 7 knots, but by the end were only getting 6.2 to 6.5. We passed that off as "the river is narrowing, so the current is growing."
3. Our anchorage, on a tributary, ran opposite of what we believed it ought to be. We just passed that off as "the waters are higher than usual" and ran with it, anchoring facing the Ohio. We didn't move all night.
What was really happening? They were filling the pool. There were massive storms to the north of us yesterday and odds are those dumped a bunch of water. Or, due to the high heat, they were generating lots of power at the lock and dam, McAlpine, to deal. Whatever the reason, they started pushing as bunch or water down river (and at us). All our weirdnesses were explained by that fact. When we woke we noticed the water was nearly 2 or 3 feet higher than when we went to sleep.

We were a bit worried about getting through McAlpine. While they have 2 chambers, 1 is in repair and will be until November. About 2 weeks ago boaters we know who are ahead of us has to wait over 3 hours to get locked through here. Our lock luck held out -- as we approached the doors were opening.

The marina sat just behind a small island, which protects it from passing traffic. There was a small miscommunication between the linesman and the pilot, but no damage or incident occurred. On our second attempt we docked just fine.

Despite the heat we had a late lunch at the Silver Dollar, a local cafe run by SoCal transplants. Vegetarian menus options abound there. We had the chilequiles, and vegetarina biscuits & gravy, and a side of hashbrown casserole.