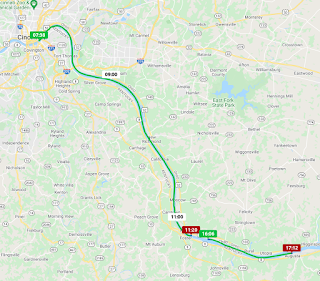 The Meldahl Lock has had issues for months now. No reason to think it wasn't going to be a thing for us. We are ever hopeful of such things.

We saw a bunch of AIS signatures stopped along the banks near the lock. "We might just luck out! They aren't moving." Besides, there are stretches along the Ohio where many tows that worked for this or that power company were parked on the banks, not moving. But alas, these were tows, all waiting for the lock. And given we are just a small PC, we were gonna wait, too.

This lock has two chambers. The problem is that one is being worked on. The bigger problem is that it's the BIG chamber that's busted. As a result, all these big tows need to go through the small chamber, and that means they have to break apart their tows, send the barges up or down, have the lock turn around, and the tow boat follows... to reconstruct his tow on the other side and get on their way. Each tow that goes turns the lock twice. Thus the major delay, for everyone.

The great news is that we were able to drop and anchor during that time, just outside the channel. We ate, Russ took a nap, I played games, we did the dishes... So it all worked out.

This is in 2 parts. First is our journey to and through the lock.
The second is docking in Augusta.

The lockmaster called us up, asking us to tie up on the wall close to the doors. The plan, as we understood it, was that the tow behind us was going to park on the wall with us, so we had to scooch as far forward as we could, right up to the lock doors. The tow captain, however didn't follow us and tied off on the larger wall. While no longer necessary, it was thrilling seeing the doors that close. In the video below watch the water -- you'll see it being lowered.

Once through it was a short jaunt to Augusta, where we met Terry Lowe. He and Russ connected in the AGLCA forum as he's interested in catamarans and possibly doing the loop. He came aboard, got a tour, then we three went out to eat at The General Store, which was a daring diner/general store. In fact, the entire town is picturesque.

That made up for a long and hot day.

Posted by Jax Robertson at 9:35 PM