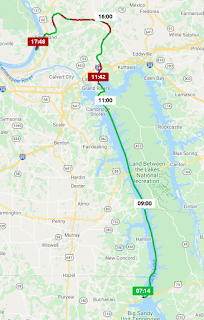 subtitled, Our Lock Luck Has Run Out

It was bound to happen sooner or later, but after weeks of fast locking it seemed so trivial. We'd forgotten was real tow traffic was like. Today was a harsh awakening.

Bound for Paducah, Kentucky (one of my favorite boating stops) we knew we had to get through the Kentucky Lock. When we called the marina they even warned us, saying we'd better check with the lock to see if we'd even get through today. "They aren't all that friendly to PCs." We took his advice and called. Sure enough they were breaking down one tow while we spoke, then had another behind that. Didn't sound great to us.

There is a second lock on the Cumberland River (Barkley Lock), and a handy cut to get over there. Russ called that lock and they, too, were locking a tow at the moment then had another waiting, estimating our wait time was about 3 hours. Well.... fooey!

The disadvantage of going to Barkley was that we probably wouldn't get to Paducah. The big advantage  was a handy and lovely anchorage right beside the lock. We decided to head that way, drop anchor, chill out, eat some second breakfast/early lunch, and maybe take a nap. Besides, it would take an extra hour just to get there. We did all that (sans the nap, which was just lucky wishing) all the while being buzzed by weekenders out enjoying their Sunday.

The lockmaster hailed us, making sure we were around. When we arrived the second tow was still waiting to get into the chamber, but the first had left down below. So it was just a matter of filling the chamber, loading in the waiting guy, getting him out, filling the chamber again, and sending us in and on our merry way. Sounds so simple. And yet, so not fast.I watched the AIS signature of the tow once he got in. Once he was lowered out of my view, I looked to see if he was moving again as a cue for us to bring up the anchor and head to the lock. I saw small movement and we started on the anchor... which did not want to come home. We pulled and twisted and backed over it several times, but it stayed put. After a couple more repositions and pulls we did manage to get it out, totally caked in thick mud. I was a bit unnerved by the experience. Losing an anchor is every boater's nightmare.

Alas, the AIS messed with me and the tow was still in the chamber. We stood station for the rest of the time before we were invited in, about another hour. All told, we spent 3 hours waiting for the lock.

Once we reached the Ohio river there were a couple of anchorages available. We picked the most protected (from river traffic, of which there will be quite a bit throughout the night) and tossed the chain.

Paducah is down river about 15 miles from us now. That was a longer journey than we wanted to take today and in the wrong direction tomorrow. From here to Pittsburgh, it's all uphill. About 900 miles.

Posted by Jax Robertson at 6:24 PM