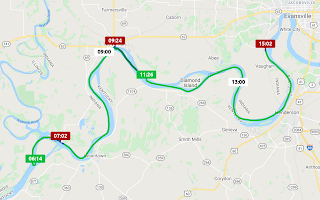 subtitled: Every Day is a Frickin' Adventure!

The anchorage last night was lovely but, yet again, there wasn't much opportunity to take a dog to shore. I could tell she needed to go when she stared at the front door to the bow, where I'd put all those pads. But we went out for about 30 minutes and she refused to do anything. Since her buddy passed away about a year ago she's been sleeping with us. Oh, yeah. You know where this is going. We woke to a mattress emergency around 2:30 am. Thankfully I have spare sheets.

We got underway about 6 am, later than yesterday, but still early. Got through the John. T. Myers Lock without issue -- the chamber door was open and waiting. We had a reservation the Nu Plaza Yacht Club in Evansville, but after a little research Russ found a highly rated laundromat in Mt. Vernon that was just a 5 minute walk from the town wall. We decided to stop there, get all the bedding washed, then go on.

As we approached the town wall we noticed some people with luggage walking down to the very dock we were headed for. There wasn't a boat tied there so where were they going? We then realized a commercial tow was headed their way and Russ put together that that tow was doing a shift change. We didn't want to be in the way (the tow would clearly take up the whole pier) so we bagged our docking/laundry plans and headed out. Once by the tow we saw it's tender, what they were actually taking to the dock, and we definitely would fit with that. So we did a 180 and made for the dock a second time. Went like clockwork.

While I walked the dog Russ started the trek to the laundromat with our wagon full of bedding. I met him there where he took another walk to the local IGA grocery and bought some blackberries. About 90 minutes later we were firing up the engines and heading out.

Side Note: Awesome laundromat, and I highly recommend it to any boaters. I've been using laundromats over the last 5 years, including our RV adventures, and I rate it among the top 5.

Just before leaving I used the head ... and discovered the boat no longer ran water. We left anyway since we have some drinking water stored and Evansville is 4 hours upriver. Russ went to see if he could suss out the cause quickly while we were underway. Within 10 minutes of leaving the dock the starboard engine sputtered and died. Just died!!!

I ran slowly on the one engine while Russ took a look at that problem since he thought the two were related (the water pump is located in the starboard engine room). They were ... in a sense. While mucking with the water pump he bumped the engine's fuel filter selector, which effectively shut off fuel going to the engine,  thus starving it. The engine turned over right away when put back into the correct position.

We got docked by 3 pm. Wind came up a bit, blowing around 16 mph, but fortunately it was on our nose at the marina so docking was smooth.

Russ took apart the water pump to find a small piece of solder in the relay. Once removed, it worked like a charm. I'm off to go take a shower.

Posted by Jax Robertson at 6:59 PM