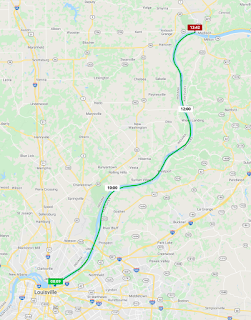 With the exception of lots of wood and stumps and branches and detritus in the water causing us to dodge and weave and zig and zag all day, it was a pretty mellow trip. Not too long, which I like.

We changed our plans en route. There's a restaurant here that has a pier that's open to transients. That was our goal. But more pressing goals was 1) getting fuel (all this upward pushing burns the gallons!) and 2) getting pumped out. The town of Madison also has a public dock with a pump out. The plan was to pump out there, then go back the 1/2 mile to the restaurant for the night, and fuel up in Florence tomorrow. There was a marina that claimed they had diesel, Rivercrest Marina, but the did not answer various calls Russ made over the last couple of days to get a fuel price.

While underway, and just 3 miles away, Russ called them again. Wouldn't you know it! They had fuel and were willing to do a bulk deal for us, making them cheaper than Florence. They also had space for us AND a pump out. So, serendipity! Well, the pump out didn't work... so close.

It took a long time to tank up on fuel, almost 2 hours. First because we needed it -- the port tank was at 15% and the starboard at 25% so lots of space in the tanks to fill. Second, the pump wasn't fast. But more importantly, they don't get big sales like us usually so there is a shut off (the pump assumes it's just spilling fuel everywhere). They had to close out the sale then restart the pump for us to keep going. To that end, we're seriously hoping the fuel is okay. Diesel, like fresh fruit, doesn't last forever.

We walked into the town of Madison and toured their downtown. Gotta say, another cute Main Street with restaurants, ice cream shops, clothing stores, appliance stores, nail spas, banks, pubs -- the works. We ate at the Off Broadway Pub and had a wonderful salad, a fish taco, a sweet potato taco, and a caprese sandwich. All wonderful.

Posted by Jax Robertson at 6:56 PM