We remain stationary here in Longboat key, but not at all bored. We are still knocking out projects. Some are completed, some are in motion (like getting the upstairs furniture reupholstered), and some are perpetual (like cleaning the boat, which has been an ongoing activity since December).

We decided we liked our Bradd and Hall chair so much that we should get another one. For the dog. Moving in the new chair meant hauling away that the old settee where the new chair was going to go. The settee was getting old and squishy, no longer comfortable to sit on, and took up a lot of space.

Long ago we got tired of fenders littering the decks, tangling and tripping us as we needed to run for lines or beer. We realized that Walmart had big buckets that worked for stowing them while underway, the drawback of which was that we looked like Appalachia on the water, bringin' down the 'hood with our back water ways. So, we got shiny, more official fender holders. 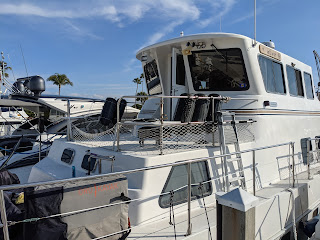 Project #3: We did manage to sell a number of items. We had 2 deck chairs, the aluminum kind you see in West Marine all the time, which we sold and replaced with 2 folding teak ones. Russ also sold his bright orange kayak as is going back to using the Oru origami kayak.

We've always had 2 radios, a main radio, who's antennae is affixed to the boat, and a little handheld which we use for docking and short range conversations. But sometimes it's nice to hear 2 or more channels. So Russ installed a 2nd radio, antennae and all. Now both the pilot and copilot have radios.

It's been a frustration that we can't know what the weather is right now, right here, acting on the boat. Cat-n-Dogs had one but it was rarely accurate. Russ installed a new one on inQuest. So far it's been great, since it's attached to our NMEA so we can see the info right from our phones!

Smaller projects include replacing the washer vent, which we ripped off in St Augustine. I couldn't get a good shot of it from the pier so you'll have to trust me that it's new and shiny.
We have had a couple of little adventures. Recall those new refrigerators we put in last month? Well, this happened.

While moving things around in the fridge one of the glass shelves exploded. We're getting replacements, yes plural, as I just want to replace the other one still intact in the other fridge.
A funny story: We went to eat lunch outside at one of the restaurants here called Latitudes. It's on the beach facing the Gulf. A lovely spot to eat. We faced the water and I see a seagull flying toward the restaurant. Closer and closer, it looks like he's aiming for the couple next to us (the man, of which, wasn't facing the water so he didn't notice this happen). Closer, and closer, and I'm sure this bird is going to land on his head! But it just misses him and artfully tips over his high stemmed glass of red wine, which not only spills all over the chicken wings but manages to knock a couple of wings to the ground. Waiting nearby -- as this was clearly a rehearsed maneuver -- were a bunch of little birds who immediately pounced on the fallen wings. Bird cahoots!
Projects to be updated in our next installment "Even More Projects" will include a new refrigerator for the sky lounge (turns out the Whynter was totally busted so they're sending a replacement) and new upholstery!
Posted by Jax Robertson at 5:24 PM 1 comment: