THIS TIME FOR SURE!!!

I know. It does feel like we've been here for a while. We planned on leaving this weekend, but... well... while the weather finally looked awesome it is Memorial Day weekend. That indicates the official start of boating season. Pare that with great weather and you get bunches of boaters out and, frankly, we're grumpy.

So. We're staying put until Wednesday.

Then. This time for sure! We're confident. Sorta.

Posted by Jax Robertson at 9:32 AM No comments:

We're here for another week, hoping to leave around Friday. Weather, of course.

Ahead of us is one more protected day of travel where we really don't care what the weather is like. But after that, it's wide open spaces for days. So we're looking for 3 nice days to travel, 1 to get down the Delaware, and 2 to get up to New York. Still no sign of that happening. Moreover, marinas and anchorages dwindle in these areas, so it isn't an option to just "wait it out."

When we did the loop we went down the Delaware to Cape May and stayed there a couple of days. I'd like to do that again. Adorable town. But it looked like we'd be stuck there for 10 days, and I'd rather be stuck here in a bustling metropolis.

Once you leave Cape May you're on the Atlantic. We really want those travel days to be excellent. There's a great anchorage in Atlantic City, then it's a long run to NY.

In conclusion we're hanging out in Baltimore for another week, hoping this crazy, windy Spring finally moves on.

Posted by Jax Robertson at 5:44 PM No comments:

The weather system is moving extremely slowly, but southward. In theory we could head out today, but we made a reservation for a week. We love the place.

What do you do in Baltimore? Well... stuff.

Visit the Ministry of Brewery for example.

Or work on a project. I'm hoping we never have to use this but we're creating a scramble net. This is something we deploy off the side of the boat that helps a MOB (man over board) get back on the boat. If we get to warm water (probably not anytime soon) we're going to put it through its paces.
Or, do a jigsaw puzzle! We got this for Christmas. It's wooden, so the pieces are laser cut and come in whimsical shapes.

Russ is also working on changing the storage access under our bed. We were motivated to try this after seeing Highwind did (Hannah and David De Regt -- they have the best ideas!). We will get just a little more storage space as a result.

Lastly, to celebrate so much accomplishments, we had Indian food at the Himalayan Spice restaurant. They were awesome 2 years ago. They are awesome now.

Posted by Jax Robertson at 7:10 PM No comments:

Waiting for the weather 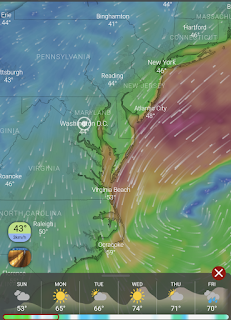 Been some nasty days. Russ has been reading blogs of folks complaining about the winds and rain up and down the east coast, from Florida to New Jersey. This is a massive storm.

Wind and rain aside it's also impacted temps. Today is our chilliest day, high 51, low 43. So what do you do when it's so nippy and inhospitable outside? Play games, of course. A friend gave us a puzzle last Christmas but we haven't had a chance to pull it out until now.

Eating is good. Having spent a couple of months here in 2020 during Covid we recall many excellent places. Like Dangerously Delicious Pies. Took home lunch from there, getting slices of a vegetarian chili pie, potato pie, and spinach quiche. All were outstanding.

After today things should warm up a little. We might even see the sun again!

Posted by Jax Robertson at 8:33 AM No comments: 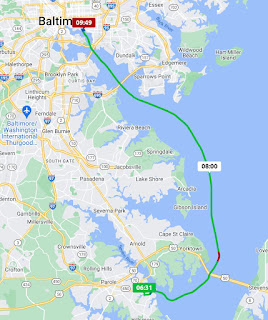 We really like this area. Annapolis has nice neighborhoods and eateries. Baltimore did a great job of cleaning up (read that as "gentrifying") the waterfront. Both places have lots of history and lots to do.

That is why we spent a couple of days in Annapolis on the ball, and why we're spending a week here in Baltimore. Well, weather may have something to do with it, too.

A mega-super-soaker is coming this evening, bringing gale warnings and small craft advisories. This morning, before any of that could get started, we were up and off the ball. We got through the one and only bridge by 7 am. The total trip time was about 3 hours. We snugged into our slip by 10 am.

As predicted the rain started right upon arrival. Russ got soaked getting the boat secured. The storm will be around for a couple of days but after we should have some decent "out and about" weather to enjoy.

Taking a toodle around Spa Creek.
Checking out the mooring options.

Posted by Jax Robertson at 3:28 PM No comments: 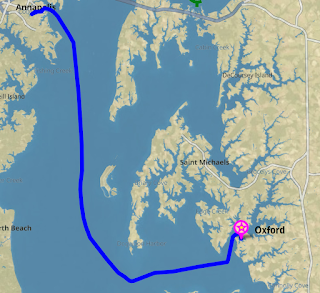 Not only was Robert Morris Inn restaurant closed Monday but it was closed Tuesday as well. However, they were open for breakfast every day. This morning, before we headed out, we went. We took the tender to the public dock at the end of Market Street and walked 10 minutes to inn. Russ had the eggs benedict which is made with massive lump crab (so wonderful!) and I had the malted barley blueberry pancakes. Also wonderful!

Back on the boat we hoisted the anchor and headed out. Our Navionics told us it was a 3 1/2 hour trip to Annapolis. Once we got underway we realized its treachery, taking us through a cut and out behind some islands. We took the longer way around, ensuring depth and no disaster.

While not the prettiest day the wind and water were dandy.

We'd been here before, staying on the balls in the bay. It was rocky and noisy. Folks had recommended going beyond bridge to the quiet ones, however you have to get beyond the bridge. It only opens on the hour and half hour. We stood station for 20 minutes for the next opening, then wandered around checking out the locations of balls available. While not ideal we had a lovely little cruise up and down Spa Creek and its darling homes.

We'll be here for a couple of nights since tomorrow isn't looking great. Friday, if the weather holds, we'll make a dash to Baltimore.

Posted by Jax Robertson at 5:54 PM No comments: 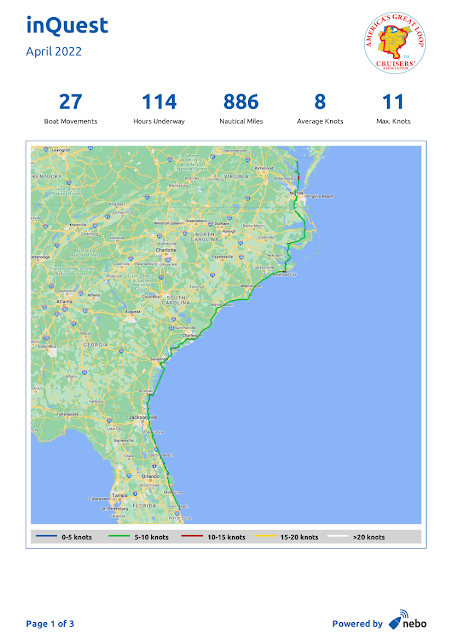 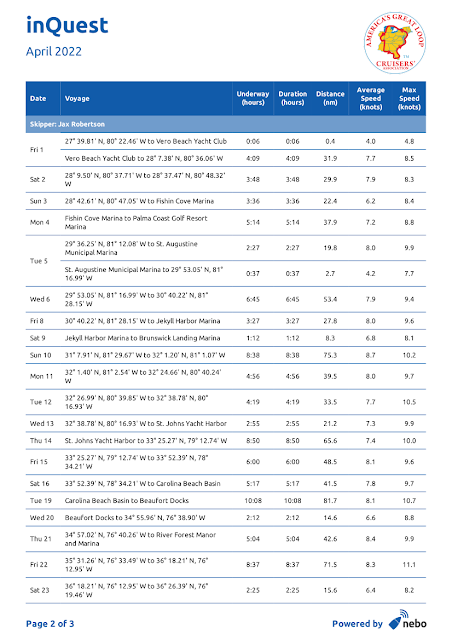 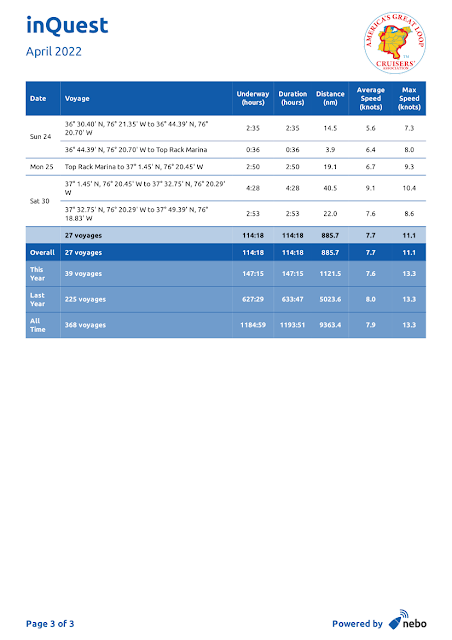 Posted by Jax Robertson at 8:53 AM No comments: Originally we thought we'd stay in Solomons for a while. We just decided to move on. Had a great meal, mingled with the locals a bit, we even donated a burgee to their collection (and got one of theirs in return!). Moreover, the weather changed (again) and today seemed better than tomorrow. So, we up and left.

We left early again. Frankly, it's what we do. We like getting going, then settling down early and taking naps. That's a big thing for us about boating -- naps.

There was a lot of traffic on our route today. We even had a massive container ship come up the channel at 15 knots, racing us as we intended on crossing the bay. Rather than put the spurs to her we throttled down and waited, then crossed behind the massive vessel. (You can see the dark spot on our map to show where). Her bow wake was formidable; we hadn't fully secured one of the fridges so it opened and spilled some food stuffs -- a plastic container fell victim.

We got in early, around 10:30. We'd been to Oxford on the loop and just thought the place was darling. Today, however, most everything is closed. We'll wait until Tuesday to go to shore and visit.

Posted by Jax Robertson at 6:11 PM No comments: 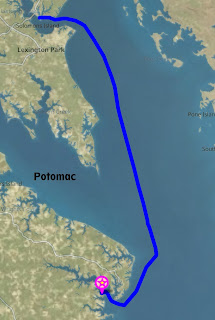 All the weather apps said the same thing: the day will start out great then get windy after 2 pm. Since we had a 5 hour trip ahead we didn't tarry. We got up early, around 5 am and had the anchor up by 6.

Nifty sunrise happened as we were leaving. As predicted, it was the only time we'd see the sun for the rest of the day. Slowly clouds covered the skies, but the wind remained calm and on our stern. The ride all day long was just perfect -- zero issues crossing the Potomac.

We snugged up to the transient dock at the Solomon Island Yacht Club. It's the third time we've been here. The t-head they reserve for transients makes getting in and out trivial.

Keeping an eye on the weather we'll take it day by day, staying tonight for sure and possibly tomorrow.

One of the yacht club members recommended a place to eat called The Island Hideaway. Some of the best Buffalo Cauliflower we've had in a long time!

Longer vid of our getting up and out today.
But you get to see the sunrise.
Also it was bumpiest right at the beginning of the day.
The rest was perfect.

Posted by Jax Robertson at 3:46 PM No comments:

We'd been watching the weather for days now trying to time this next bit on the Chesapeake. The bay is largest in the south, so more opportunity for weather to be an issue. Additionally, the weather has been very odd. Windy through the night and calming in the afternoon, which is the opposite of how it normally works.

Tucked in the little Hampton Bay where things were calm we decided to head out around 8 am. By 9 we were on the bay, and it wasn't the best ride. Very lumpy. And confused, which meant that there was no way to make the ride smooth; no matter where we turned the water was on our bow, and we don't ride that well. When it was best it was 1-2 foot chop, and at it's worst 2 with occasional 3.

We set our destination to an anchorage up the Indian Creek. But the ride was uncomfortable enough that we bailed early, going to Deltaville and cutting our travel time by about an hour.

Looking ahead we thought we might be at that anchorage for a few days. The wind predictions, which didn't seem too bad a few days ago, now looked less than fun. Once anchored we had lunch and took naps. We both got another Covid booster a couple of days ago, which knocked me out yesterday, including the nights sleep to today. I needed the sleep.

After naps Russ checked a number of weather apps. They said "go now!" Russ even pinged a looper out on the bay to ask how the conditions were (we do love Nebo!). They replied, "Flat and calm." So, around 4 pm, we hoisted the anchor and set out to get another 3 hours in, heading to Sandy Point. On the Wicomico! Heck, that's fun to say.

This is from both the morning and the evening, just to give
you and idea of what was like and don't like.
Otherwise stated: More of this, less of that!
We want to get to Solomons to wait out the next few days. That was a 7 hour trip from Deltaville. Now it will be a 5 hour one. The only big river left to cross to get there is the Potomac. We'll make that call in the morning.
Posted by Jax Robertson at 9:20 AM No comments: