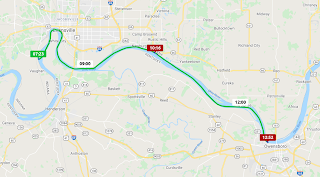 Technically, we docked along an old lock wall (Lock 46) that is no longer being used. More on that in a bit.

Getting out of the Evansville marina was a little tricky. We made 2 attempts. When we docked we slipped in between 2 boats, all of us parallel on a pier. The one ahead of us left yesterday. The river flowed pushing us down stream and into the boat behind us. Our first attempt felt too rushed, and we didn't want to have the current push us into them. We move forward, rolling on our fenders along the pier until we could swing the stern out and let the current ease us backwards and clear.

Once on our way we notice a lot more traffic than we'd seen a few days ago. At one point there were 4 of us almost side by side, 2 up and 2 down, passing each other. The next lock, Newburgh, was about 15 miles from the marina, but a number of tows were on the water heading up with us. They looked spaced out enough that we didn't feel we'd have much of an issue. Moreover, all the locks we've been through on the Ohio have had 2 chambers, a big one (1200 feet) and a small one (800 feet). All the tows need the big one. And we are just a tiny PC by comparison. We called the lock about 2 miles out, and the doors were open and waiting. We went up a whopping 6 feet.The description of the Owensboro Town Wall said there was over 1000 feet of wall to tie up onto using the ballards. However, the pool is about 5 feet higher than normal. As a result, most of the wall is just at the water line, which is impossible to fend off. There were a couple of 80-foot juts that are a bit higher. We tied up on one of them.

Then we hoofed it into town, which was about a mile away, and enjoyed a fabulous Mexican dinner. I originally wanted pizza (for those who know me I always do) but I noticed this place had Camarrones Al Mojo De Ajo (Garlic Shrimp). And that's just a dare! We judge our Mexican restaurants by it. And this one was in our top 5. Possibly our top 3.

Posted by Jax Robertson at 5:37 PM