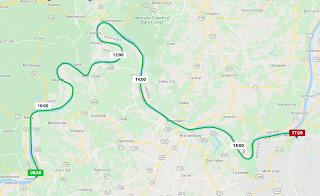 Longer day today. But no locks. A bit more traffic due to the weekenders and, for some reason, and a few more tows. Oh, and back into Eastern time.

Right off weather looked like it might be an issue for the day. Our weather apps showed massive rain to the south of us (from the tropical storm) and massive rain to the north of us. While we traveled the north storm dipped down just a bit. It looked like we were going to get a deluge. The winds kicked up into the mid-20 mph. But we got a spritz of rain ad that was it. Clouds parted, and the day remained mostly overcast but pleasant. It wasn't nearly as hot as it had been predicted.

The Ohio is receding but still well over it's normal levels, which means travel for us is much slower. We are constantly running up a really big hill.

All these anchorages are new to us. Russ reads reviews of them on various guides so we're as prepared as we can be when we get there. Salt River was no exception. We were told there were a number of bridges, all of them high, and that the last one had a "none shall pass" sign on it warning about it being a military area and you just might get blowed up!

We traveled all the way to the "blowed up" part, seeking anything looking like a reasonable anchorage. The problem was, while the river wasn't crazy wide, it was crazy deep. Mostly 25 feet or more. We have the rode, so we can do it. But setting it is always tricky, since you need to let out a LOT of rode to be able to pull the anchor more horizontally instead of vertically. Also, once set (say to a 5:1 ratio) that makes for a big swing circumference. I already mentioned, the river is not that wide. To deal with that you set a stern anchor or "med moor", which is to tie a line to something solid on the bank, like a tree.

This river was bizarre. The further back we traveled the deeper the thing got. We tried to anchor at the "none shall pass" sign, but couldn't get the anchor to dig in. Taking that as a sign we came back out and found the shallowest spot we could. Dropping an anchor there worked but it took a bit of coaxing. None of that made us feel good about dropping a second anchor. With me at the helm holding position Russ dropped the tender and we attempted to med moor. But (crazy thing 2) the river ran in reverse. You'd think it would run TO the Ohio, but no, the current came from the river, turning the boat to face our entrance. Moreover, it looks very stable there. So we just shut off the engines and walked the dog.So. Here's hoping that all works fine for the night. (Did I mention the tropical storm south of us?)

Posted by Jax Robertson at 9:32 PM