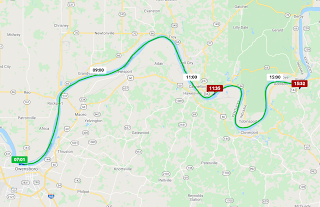 When we woke this morning we noticed that the river had receded about a foot. Good news, since that should allow us to travel a little faster.

Our next stop was an anchorage about 50 miles up river, Sinking Creek. But the day was supposed to be crazy hot and we thought hanging out in the heat of the afternoon didn't sound like much fun, so we had a secondary target about 10 miles further upstream. But... boater life.

We arrived at the only lock today, Cannelton, around 11:30 am. The doors were a bit slow to open but we basically were able to glide right in. We got secured to the wall, then I called the lockmaster and confirmed we were ready. Waiting... waiting... waiting... the doors aren't closing. I asked Russ if the lockmaster responded to me (we've had that happen, where they didn't hear my call and didn't close the doors). Nope, there was an acknowledgement. Waiting... waiting... waiting... The lockmaster hailed us. There's an issue with a valve so this might be a few minutes. "Copy that, inQuest standing by on 13." Waiting... waiting... waiting... Lockmaster hails us again. "So, we think a log is blocking the valve and if it doesn't close I can't fill the chamber. There's a tow in the big chamber coming down. As soon as he's out you can go to that chamber and we'll lock you up." "Copy that. And you'll tell us when that is?" "Yep. Stand by on 13."So, we made lunch, played with the dog, drank some iced tea and waited for about a hour while the other chamber got ready for us. When we heard the horn (indicating the tow could leave the chamber) we untied, spun around in the lock (a first for me), slowly made our way out the in-door. We watched as the 15-barge tow crawled out of the lock, then we scurried in behind him and secured ourselves again. During the wait the lockmaster talked to another tow, also wanting to lock down. He told them we were going to be in the lock but they could tie on the wall, just make sure they leave us enough room to get out. So when the big doors opened, we could see the wee gap we were supposed to get through to get out. But we managed.The delay was about 90 minutes, so getting to Sinking Creek was no longer going to be too early.

All day long Russ was training his battery remote, which meant we have to burn the batteries down to a certain voltage before charging them. Throughout the day he checked their levels. Took a long time, even with running the AC upstairs and down nearly all day. But that's why we have these new batteries. So we     can run the AC all night if we have too without power.

Posted by Jax Robertson at 7:53 PM