From the campground to Fulton, Midway Marina 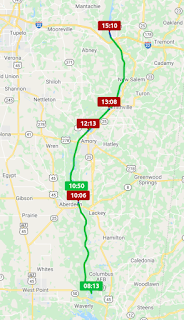 We haven't been to Midway before. We planned to stop here when we did the loop but tow traffic and the locks made us anchor out. It's easy in and out, and has a dandy little restaurant that overlooks the lake and river.

After taking the dog for a walk we hoisted the tender and headed out. Four locks lay ahead. Lots to do today.

Lock #1 (Aberdeen) was the only one where we had company. We got into the lock and got held up. I thought the lockmaster told us something was wrong with a valve, but it turns out we were waiting for 2 boats. They were fast boats, a Carver and something like a Carver. They got in quick and, once the lock doors opened, they got out too. Didn't see either of them until we got to the marina -- they were already there.

Lock #2 (Amory) was open and ready for us. Lock #3 (Wilkins) wasn't. He profoundly apologized that he read the fax wrong and thought we were downbound. (So, they get faxes about boat traffic... interesting.) It didn't matter since by the time we reached him the green light was on and he was ready for us.

Lock #4 (Fulton) snuck up on us somehow. Usually we hail them about 2 miles out for I misread our location. I called him less than a mile out and he had to turn the chamber. So we slow boated for a while, which is better than trying to stand station. Typically locks are near dams, and since we're headed up, the dams are letting water run down. That means things can be a little turbulent at the base of the lock where currents twist you one way or another. Hard to stay put.

Throughout the day there was rain on and off with occasional thunder. It rained hardest right after the last lock. We only had 3 miles to the marina at that point. Checking the weather we knew it wouldn't last, so we slowed our pace to prevent docking in a downpour. Or gale. Even the dockmaster remarked on our good timing.

Posted by Jax Robertson at 8:42 AM