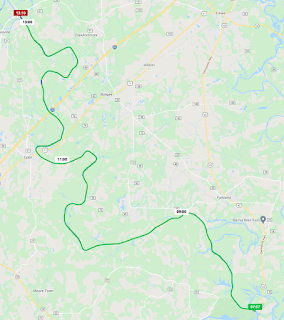 We got a lot done in Demopolis -- tanked up with water, fueled up, pumped out, took out the trash, picked up a package for Russ, and ate mediocre (albeit satisfying) Mexican food in town with the marina's courtesy car. Given it would be a shorter day compared to the last couple, we departed a little later.

While in Demopolis we talked to a number of boaters who are headed somewhere. None of them were leaving until Tuesday. Their plan was to avoid the Memorial Day boat traffic. But I gotta say, we've seen very little traffic at all. The most congested was just after Coffeeville lock, and even that just wasn't so bad. Maybe because we've been on the ICW, which is crowded even on an unremarkable Wednesday, but this has been amazing. We've had the river to ourselves most of the time. We locked through 3 locks in as many days, and each time not only did we have the chamber to ourselves but the doors were open and waiting for us. That just doesn't happen.

We'd been to this anchorage before. It's by a park so it has a boat ramp -- and that means a dinghy dock for the dogger. Getting in was a little more exciting than we remembered. At onc point we only have 1 foot beneath the keel. Thank goodness we have a shallow boat.

Got anchored by 2 pm. The heat is coming back. Tomorrow it will be warmer, but we'll be in a marina.

Posted by Jax Robertson at 5:26 PM