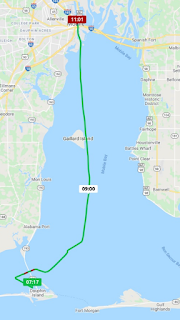 You know what every mariner loves? Being woken up at 1:30 am by a fire alarm. Spoilers: There was no fire. The alarm just lost its brain.

In that sleepy stupor, Russ checked how the batteries were doing. They'd gone down quite a bit. So he started the generator and set and alarm to turn it off in an hour. We didn't need that, though since the smoke detector went off around that time. At that point Russ pulled the little bugger off the wall and stuck it where we wouldn't hear it.

The rest of the night passed without incident. We were up early, walked a dog, weighed the anchor, and headed to Mobile. The last time we were on the bay was slightly less than miserable. It's hard to even say it's the same body of water. Today's right was nearly flat. A wonderful cruise. We docked in front of the convention center without any issues. 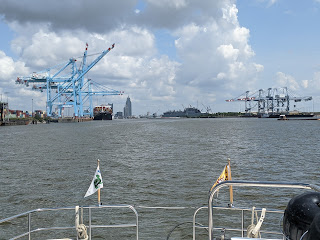 Side story: Remember all that new electric work he did? Well, this incident of low batteries was more proof to him that he wanted to upgrade our batteries to lithiums. He tried to order them a month or so ago for the new system, but Covid continued to have supply chain issued. However, that seems to have changed, so he ordered 6 of them while we were en route to the island. We're having them sent to Aqua. He'll install them there. We don't, however, want to lug around the other batteries. Russ contacted Robin and Charlie McVey, who are the AGLCA Harbor Hosts in Aqua and told them of the delivery and extra batteries. Charlie seem interested in them, and our slightly-used invertor. That, however, we left in New Orleans. So. As soon as we docked, Russ got a rental car and he drove back.

Hey. It's only a 2 hour drive each way. We'll be underway tomorrow.

Posted by Jax Robertson at 7:42 AM