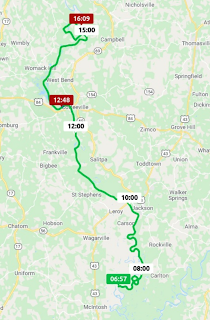 We had a front come through a couple of days ago. Now the winds are from the north, bringing cooler temps. Perfect for us. No power issues since we don't need AC.

We've been making a push to get to Demopolis, which we should get to tomorrow. But it's further than we thought. Largely because we're going to need water and don't have enough to go 2 more nights. We have plenty for only 1.

Very windy and twisty day. Our only excitement was Coffeeville Lock, which was one of the fastest lock-throughs we've ever done. We were the only traffic around, so I hailed the lock master about a mile out. He basically had the doors opening as we pulled up. We just went right in, got our ride up some 30 feet or so, then came right out. The first of many, many locks we'll do this summer. I hope they all go half as well.

Bashi creek had the advantage of a small park nearby, which means a dinghy dock, a feature that makes pug-walking easier. We were the only boat in there so the night was quiet. Decent network, too. In fact the only bummer was, just as we were pulling into the place a pontoon boat was being taken out. I think they (accidentally) dumped a bunch of gas into the water. It slowly drifted down to where we were anchored. So kinda smelly, not to mention illegal.

Posted by Jax Robertson at 8:47 AM