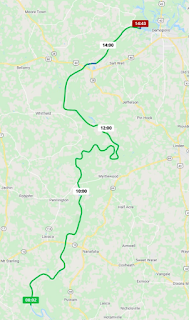 Early rise, made some coffee, walked a dog, then we got underway.

Rivers require a bit more concentration. We have autopilot, but that sets a direction, so you still have to be the one who turns the boat. We also have what we call "Super Autopilot" that totally drives the boat, but that captain is drunk, complains about every bridge it goes under, and doesn't read the depth charts well. So we do the steering.

We've been passing a tow going our direction called the Mary Ena Devall daily since we left Mobile. Today, they asked us to wait until we got around a bend. We slowed down and did. After I gunned the engines and they hailed us (technically he called "the little boat behind me"), asking to wait longer since the channel narrowed. We fell back again. Once it widened he said, "If you can get it done before the construction, take me on the one." Ahead was some kind of port for a mine or mill, with barges out to be filled. Oh yeah, we got it done. And that was the most exciting thing that happened today. So... not much.

Our position is being broadcast on AIS, just like the tows. With the twisty rivers, we can see where everyone is, and they can see us without actually eyes on. That doesn't mean they know what you are. An oncoming tow hailed us and asked, "What are you pushing?" I laughed, told him we were a little PC. He said, "Then I'll see you on the one."

We did have another lock, which timed out perfectly. After hearing him talk to PCs he was locking down we told him we were coming. The doors were open and waiting when we arrived.

Every now and again our little boat impresses a tow captain. We were recently hailed by a tow after we passed when he asked if we had channel 18 (as far as we know we have the all!). After switching he asked, "What kind of boat is that?!" Russ thinks that we look like a little tow boat, making inQuest attractive to tow captain's sense of style.
Posted by Jax Robertson at 4:39 AM