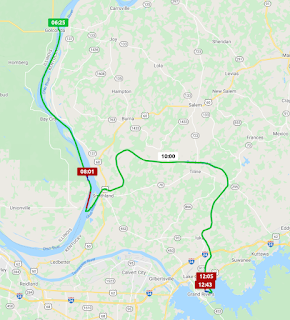 Despite the low miles we needed to put in today we were up and out early. There were 2 locks between us and Green Turtle Bay, the marina we're getting hauled at, and one of them held us up for a couple hours on our way to the Ohio. Turns out both went swimmingly, doors open and waiting, and little other traffic around. We were docked in a slip by 1 pm. Shortest day since, well, Pittsburgh!
We said farewell to the Ohio River. We splashed into it on June 13th, and depart July 28. We traveled 925 miles both up and back. We saw some cute little towns, had some adventures, saw fireworks on the 4th of July, and ate at a number of interesting restaurants. However, I don't know we'd ever do it again. Mostly the Ohio is made for tows. It wasn't always like that, according to the locals. There use to be lots more marinas and eateries and "boat destinations." But over the years, flood after flood wreaking havoc, many were washed out or destroyed, and never rebuilt.
I didn't get to Paducah. We're hoping to get the courtesy van here and take a drive there over the weekend.
Once we get underway again we're on the Cumberland River. First we get to explore the lake, and the park area called The Land Between Two Lakes. Should be lots of anchoring opportunities, lots of lake-side restaurants, and (with any luck) swimming. We'll spend a bit of time in this area, exploring, while we slowly make our way to Nashville.
Total lock count: 48
Russ at the helm in the first lock, me on lines.
Off the Ohio and onto the Cumberland.
Yep, it's a sharp left-hand turn.

Posted by Jax Robertson at 2:39 PM