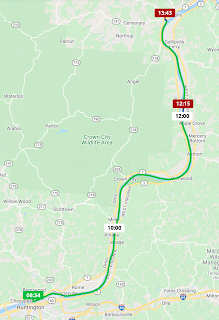 So. How was your day?

Pretty much right from the get-go ours was... interesting. Almost disasterous. And at times, infuriating.

At 12:34 am I saw lightning through our windows. We knew storms were coming but we left windows open for the pleasant air. I mention it to Russ, who suggested we wait until the rain came. That said, we were running around, closing up the boat at 12:36.

The mighty storm lasted about a hour, with a good bit of rain and lots of thunder. The wind pelted us, but nothing happened, other than keeping us awake with his bluster. Eventually, we did get back to sleep.

We shoved off the wall easily and started the day. Not particularly long (the Robert C Byrd Lock was open and waiting for us, so no real issue there), but due to the rain the current had increased against us, about a knot. And that got Russ concerned. We think we'll have just enough diesel to get us into Pittsburgh. But we may not if we have to push our way there. For whatever reason, marinas in this area do not sell diesel.

He had a plan. He'd contacted a number of petroleum companies that deliver; they load up a truck and meet you at a designated area. One company delivered to Gallipolis (pronounced: gallip-pah-LEEZ), at the Boat Club. We call the club to get permission and, yep, they do that all the time.

We go. I headed down the narrow creek that led to the boat club, keeping an eye on depth. 5. 4. 3. 2. I'm calling out these numbers to Russ, who's on the bow (we have headsets on, so I'm not screaming or anything). Just as we got to the first bunch of boats (in little boat houses) we hit bottom. inQuest makes a distinct lurch when that happens. I know it all too well. We press on. We hit again. It's soft and squishy, but not a good feeling at all.

I stopped the boat while Russ called the dockmaster for instructions. He wants us to come another 150 feet ahead to the next dock, where we can tie up. We try, and try, and try... We're slipping, we're sliding, basically plowing our way, fishtailing really, getting closer. We were still 20 feet off when we just weren't going any further.

At this point you're probably asking yourself, "Why are you trying to hard?! Bail, for Pete's sake!" Both Russ and the dockmaster knew that within the next 24 hours the pool was going to rise another 3 feet. So if we could just slog our way there, we'd stay the night, then float away.

Wait... full of fuel we don't have right now. Oh wait, how were we going to fill? "Normally folks just back up against the wall there," the dockmaster said, pointing at the rock wall by the parking lot, "and they'd run a hose."

I didn't like anything about this plan. Three more feet or not, backing down the fairway that already had us stuck did NOT sound like a good idea.

Now we had to get out of there. We start a process of backing in small bursts, then idling, then backing, then idling. Eventually, we wiggled free. There wasn't anything deep anywhere. As we went we kept bumping the bottom, then backing with a bit of gusto to overcome it. Moving slowly we back our way through the muck and into the small channel that brought us here. It was never wide enough to turn around, so with Russ on the stern giving me directions, we backed inQuest right back out into the Ohio River.

We decide to go on a ways and skip Gallipolis altogether, hoping to clean off any muck on the bottom. Before anything overheated, Russ inspected the engines, picking the starboard first since it's easiest to get into. Then called me to TURN IT OFF. While that was going on, the port engine overheated. I checked all the traffic and we weren't in any risk of being mowed down by a tow. We killed both engines and we drifted.The port engine was an easy fix. All the mud (I mean, we sat in it for nearly a half hour) clogged the raw water filter, which is how the engine is cooled. Russ flushed it, and we turned the engine over. It started to cool off immediately.

The starboard engine, however, was a mess. There was transmission fluid all over the floor. Russ worried the drive exploded given the wrecked state of the engine room. Using just the port engine, I nudged inQuest ahead about a quarter of a mile so we could tie onto the town dock. Docking with one engine was tricky, but we managed not to do any damage.

After a quick examination, the starboard drive is not destroyed. This is what my mechanic told me: The filter on the drive doesn't screw into place but rather drops into a chamber. The lid on said chamber wasn't as tight as it needed to be. Normally, when gently bring the engines up or down in speed this wasn't a problem. But all the surges -- pushing the engine, then idling, repeatedly, over a prolonged period of time -- made things go pear-shaped.

We need more oil for the transmission. There's a Walmart not far away. Once the rains stops we'll head there.

...did I mention it was raining all day?

Watch us go into the marina, get stuck, and back out.
Then drift a bit on the Ohio River.
Sadly, we take a frame every 5 seconds. So this is
much faster than what we experienced. 😂

MORNING UPDATE: Remember how we thought the pool was going to increase? Here's the NOAA data this morning.

Posted by Jax Robertson at 7:03 PM