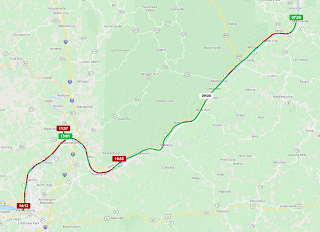 Not many times we can say, "It was a great day!" All around. The storms had passed, the air was both cooler and dryer, locks, tows... all just perfect.

We hoped to spend a couple of days in Marietta again. We really enjoyed that town, and while there we thought we'd get another top off on fuel to take us the rest of the way down the Ohio. However, the boat club yacht that we used last time (recall, we ordered a fuel truck to deliver the diesel) put a boat in the spot we'd need. Moreover, we really wanted to go eat again at 740 Social which had the most amazing Buffalo Cauliflower Wings. But they were closed Sunday and Monday. We took that as a sign that we weren't meant to repeat things we'd already done. We needed to pump out, so we got that accomplished then continued down river to Parkersburg.

Got on the wall without a problem. I'd been craving pizza for a while so we found a place that delivered. About an hour later they showed up with the wrong pizza, but the right salad. We ate that while waiting for the replacement 'za. Which was dang tasty.

We did get hailed by another tow captain who liked the looks of our boat. That's the third or fourth time on this trip. Russ thinks it's because inQuest's profile is a little tow-boat like, and they seem to like that aesthetic.

Posted by Jax Robertson at 5:25 PM