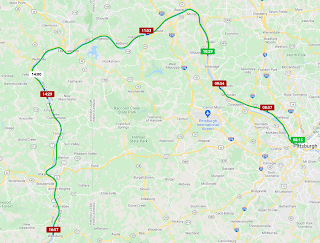 The kids left today, disembarking their river cruise with us to fly to Europe. Like many, they believe they will be called back into the office in September, so they're fleeing to get in some global travel. We wish them the best. They were great guests.

After much changing of minds -- whether we should explore the Allegheny and Monongahela Rivers or not -- we opted for not. We really want time to explore the Tennessee River, and we're concerned the weeks spent up here would mean not enough time down there. So. Back down the Ohio we went.

The current runs with us now, which is exciting. We're getting 9.5 knots without really trying. Our gas mileage should greatly improve.

While the weather was great when we left thunderstorm plagued the day. We managed to get through the first 3 locks without dealing with rain. Recall those were the odd "use your own ropes" locks. All of them went perfectly, doors open or opening as we approached.

The fourth lock of the day, New Cumberland, had a downbound tow waiting (The Olivia Rose... what a great name). We were told after they got locked through they'd flip the lock for us. Right about that time the weather took a bad turn, with winds kicking up into the mid-20 mph, lightning, and rain. I heaved a sigh... nothing like standing station but to do it in a deluge was not my idea of fun.

The lockmaster hailed the Rose and told them they may close the lock of lightning gets to be a problem. Understandably. Then he asked the Rose what he was pushing. Only 3 barges, no "red flags", meaning no hazardous material. "Would you mind if the rec boat locks through with you?"  (That would be us.) "So long as they leave the lock first that would be fine." "inQuest, did you get that?" Oh, boy, howdy, did we!

Olivia Rose slowly made it's way into the chamber, and we followed, keeping a safe distance behind. The weather worsened. I could no longer see the lock. I could see the lights on the Rose and some lights on one of the lock walls. I was thankful they let us follow the tow in largely because I wouldn't really know where the heck we were.

Lightning flashed a couple of times. The lock called the Rose, telling them to tie up on the wall then send their crew inside. We were going to wait this out. "That goes for you, too, inQuest. Tie on the  long wall." Copy that.We waiting about 20 to 30 minutes while the storm passed over. Then they called us into the lock. The Rose was already tied off and good to go.

For whatever reason I failed to recall I was slowly making my way past a massive engine. Suddenly inQuest lurched to the right. Russ called, "Go faster!" I didn't see the churn the tow was giving off and it nearly pushed us into the starboard wall. We managed, no damage, we really didn't even get that close, but it was a stark reminder of how powerful those boats are. And just a little scary.

We aim for our favorite pin, #4. We count them out as we enter the chamber, and there are 6 in total. The Rose is on the port wall, and take up most of it, so we're on the starboard. As we approached the pin, however, Russ realize there was no bollard there. We move forward to the next bollard, but THIS chamber only has 5 pins, and that last one is really close to the doors. Russ notices that the one right in front of the Rose is available. So we take it.

Otherwise, the lock went smooth as silk and the weather passed. We had another 15 miles to go or so before our destination, the town wall in Wellsburg.

This movie starts at the 4th lock of the day. You can see a bit of bobble passing the tow.
Trust me. It was more than a bobble! You can also see how rainy the day was.

Posted by Jax Robertson at 9:22 PM