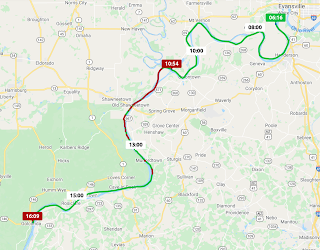 The heat is soaring for the next few days so being in a marina feels good. Not just because we can plug in the boat and roar the AC all night long, but also because we don't have to dinghy the dog to shore in the heat. Much easier to just step off the boat to get her walked. Then hightail it back to the AC.

Hopefully today was last of the long days. But we do have 2 locks to get through tomorrow, one of which is known for it's tow traffic. Fingers crossed. Otherwise, we're only 55 miles from Green Turtle Bay. (Sounds like a cake walk compared to the last 3.)

Absolutely clear all day. No fog. Only one lock, which was opening as we arrived. In fact the only excitement to the day was the finale, docking here in Golconda.

The marina knew we were coming, and when. Russ talked to the dockmaster earlier in the day. They close at 4:30 however and we weren't sure we'd be there before then. So they gave us instructions on where to dock. We had options. Option 1 was the fuel dock. Option 2 was a t-head on one of the piers. We decided to wait and see.

You'd think the dockmaster would have mentioned "Oh, and they're dredging as we speak." We didn't get that surprise until we made the turn into the marina. Turns out, options 2 was blocked by the dredge pipes, and the dredge, itself, was between us and the fuel dock. Phone calls were made, negotiations took place, and we were told they'd stop dredging and come by. It looks all smooth in the video, but it was nice and slow in real time.

Needless to say, we're on the fuel dock.

The tow on the left is stopping for a crew change. We go in and immediately
stop ourselves. The working dredge made getting is a bit tricky.

Posted by Jax Robertson at 3:38 PM