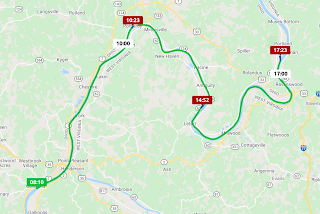 We didn't plan on staying 3 days in Gallipolis. But once we got docked (and checked out the condition of our engines) we realized the little town was going to have lots of festivities for the holiday. Including fireworks Saturday night ... which we'd have a primo view of from our boat.

So we stayed. We did a lot of walking, ate some carnival food, watched some races -- the usual holiday stuff. They even had a parade... which was largely a launching point for many political candidates.

I opened the window covering of our master bedroom and nearly screamed. The window was COVERED in mayflies, in quantities we hadn't seen before. Russ spend the early minutes of the day with his trust lawn blower removing the wee-beasts before they totally mess up the boat. I suspect the accumulation had to do with the fireworks last night. Probably knocked them all right out of their beds... and onto any white surface they could find. (For some reason they really like white.)

We left Gallipolis around 8 am. By 10:30 we were docked on the town wall of Pomeroy. Russ had arranged to meet some old friend from college, Sue and Michael. They got quick tour of inQuest, then we all went to second breakfast/lunch at one of the few place open on Sunday and a holiday. Around 2:30 we continued the day.

About an hour later we went through the Racine Lock. Doors were opening as we arrived. From now on we'll be going through locks more frequently, as the pools get smaller.

We dropped the anchor about 5:30. There's a dinghy dock nearby but lots of small crafts and jet skis on it. We'll wait until later to take the pup to shore. I'm glad I walked her in Pomeroy before shoving off.

Vid 1: Stopping in Pomeroy. Someone was in the center of the pier when we arrived so we tried to tied up on the wall below. The depths, however, sucked. Just as we were going to tie up next to him, he zipped off.

Vid 3: Anchoring behind Buffington. Took 2 tries. Russ was concerned we were too close to the land side.

Posted by Jax Robertson at 6:58 PM