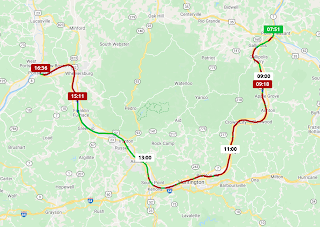 Power! Water! Luxury! And a darling town to boot.

When we came up I had an entry saying we stayed in Portsmouth. Technically, we were close, staying in a state park, but it was too far to get to town. This private boat club is right outside the town walls. The flood walls here are known for their murals. They are some of the best we've seen, but pictures didn't do it justice. Google them!

Long day, nearly 9 hours. But the water and air were pleasant, and there was just a little haze which kept the temps down.

For whatever reason the water remains high. In fact, it's 10 feet higher than its normal pool in Portsmouth. That means we get great speed with a small amount of fuel. We're motivated to put in a couple of extra hours daily and getting twice as far as we did when we came up.

Got through 2 locks today. The first of which was easy except for the entry light. We approached the lock in the fog, so we could just make out the red light and slowed. Typically that mean the doors are shut. When we got there, the fog lifted a bit, and we clearly saw the doors open and waiting. Yep. I rolled my eyes.

The second, however, was a near bummer. As we got within 3 miles of the lock, our typical distance to hail them, a tow wanting to be locked up (Bruce D) hailed them. We could tell by our AIS that another tow, Fritz (still the best boat name), was already in the chamber (which would be the BIG one). The lockmaster asked how big Bruce was, and it was settled he could fit in the small chamber. DRAT!!!! Knowing that meant we'd have to wait for him to come up before we could lock down we immediately hailed the lockmaster in case the chamber happened to be on our side already. Alas, he told us it would be a while.

We slowed down, hovering a ways from the lock since we knew Fritz was coming out eventually. The lockmaster hailed us, telling us to stay near the cells (big round structures meant for barges). We'd were just beyond them, so we turned back. We came up with ideas how to tie onto one and hang off. They are really nasty, and not at all meant for little boats. We decided we'd be better off standing station for the next hour or so.

Fritz had made it up and was coming out of his chamber. Meanwhile, Bruce D wasn't anywhere near the chamber. Tows move very slowly getting into and out of the lock. Watching the AIS and Bruce's painfully slow entrance, the lockmaster hailed us again. No tows needed to go down anytime soon so he offered to lock us through in the big chamber.

So we only had a half hour delay or so.  We got in and docked without any other issues.

We can't see the lock until we're close to it.
Then the red light confused us...
We get called off, turn around to check out the cells, which we hated.
Once called in we passed Fritz on his way out, and take the BIG chamber.

Posted by Jax Robertson at 8:17 AM