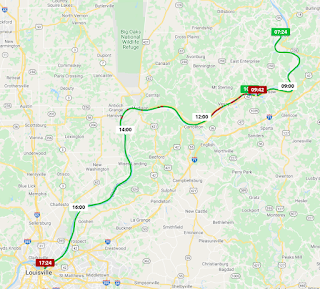 The heat's gonna kick up again. That will play havoc with us later this week, we're sure. But for now, we're plugged in and very close to downtown. We're not at the same marina, this one is run by the city. Upside: close to everything. Downside: zero security. We're not worried about us or the boat but that does mean anyone and everyone can walk around the boats. Last night, an over-zealous looky-loo wanted to take a selfie... on our boat. We were not amused.

The day started off a bit dense. Lots of fog. We ran on instruments for quite a ways, AIS and radar, and kept an eye out for logs and trees in the water. A while ago we bought some "night time" glasses for the RV; very yellow lenses. They help tremendously in foggy conditions.

Foggy start to the day

By the time we got to the only lock of the day, the fog had lifted. The small chamber was broken so we had to wait for the big one, which was being loaded from below as we approached. The lock master said it would be an hour or so. I stood station by the cells while Russ made us 2nd breakfast, some soft boiled eggs.

We did have a slight panic sitch in the lock. Recall that these locks have floating bollards. We tie a line from our beam onto the bollard which keeps you on the wall as you go up or down. But we are aware that, every now and again, bollards don't work. A branch might catch, causing it to jam, for example. We became aware the lock was emptying. Instead the line was tightening and the bollard was not moving. We'd been in locks where folks had to cut lines to free the boat, and they literally fell into the water. Not something we'd like to experience. Quickly, Russ managed to untie it (catching it early enough to do so) before we needed to cut our line. Just as he did, the bollard began to sink with the waterline. A-ha...
You can't see it from here due to the camera angle but for a moment
we were a little worried....

Every pool's table can vary. And at times the water is so high it fills, or even overflows, the chambers. In which case they close the locks. But the bollards float, and no one wants them to pop out of their notches and float downstream, or even land on the lock's decks. So they have stoppers on them, a massive bar across the top that keeps them from getting too high. We like do call it "ringing the bell", like the game in fairs when you hit the peg hard enough. In this case the bell had been rung, the bollard was pegged due to the high waters. We just didn't notice it. Trust me, we will now. We tied back up and rode without any more drama.

Now a little sad story (spoilers, not about about us, we're fine) ...

Yesterday, while docked in Rising Sun and watching Mac fly his seaplane, we saw a sailboat coming down the river. That is noticeable since there are very few sailboats around these parts. As it came closer we realized it was being towed by a very small boat. They passed us, continuing down river. The sail boat looked pretty nice, but it appeared that it's engine just didn't work. The towing boat, however, looked woeful for the task.

Fast forward to the lock today. As we entered the lockmaster chatted with Russ, telling him there would be a small delay since we were waiting for a sailboat.

Yes. That sailboat. In they came, but now the little boat was rafted to the sailboat instead of towing it. They slowly maneuvered onto the lock wall, and down we all went.

We got in late (for us), around 5:30 pm. The delay at the lock, waiting for the tow then the sailboat to get in, cost us over an hour. We were tired. We ate some dinner, we took a walk, and we went to a nearby brewery. A nice evening. We went to bed around 9 only to be woken up by fireworks around 9:45, which we came up to the sky lounge to watch.

... and in they came. That poor sailboat, rafted to his underpowered motor aid, passed us in the dark of night and headed to the other marina. I felt so bad for them. THAT's a long day.