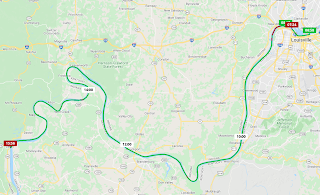 Out early this morning. Not only did we have a long day but we wanted to beat some of the tow traffic. The first (and only today) lock is just a mile from Louisville. We monitored the traffic and picked a "go" time, right around 7 am.

Our weather apps all warned of rain, but it never happened. It was a little overcast most of the day, clearing to hazy, then sunny. But hot! Temps in the high 80s and low 90s. When we woke at 6 am it was 80 degrees.

We did have a bit of a wait for the lock while they were turning it from having locked down a tow. We ate breakfast during that time. Otherwise, the trip in and through it was fine.

We passed a LOT of upbound tows in the first 2 or 3 hours. Then we were alone for a long while, having the river mostly to ourselves. We don't often play music since we want to be able to hear anyone hailing us, but today we did.

Russ put eyes in a couple of new lines. He'll swap them out for our current ones once we're off the Ohio River. They are getting stiff and a little frayed. They're sized larger than they need to be for our boat, so we're not in any risk. They are, however, tough to handle.

When we left Louisville the plan was to anchor out at Sinking Creek, which we did on our way up. But Russ read about a small town dock in nearby Derby, just a few miles up river. We do like to do new things. Reviews were mixed, some liked it, some thought it was rickety, and most everyone complained there weren't enough cleats. We decided to take a quick spin by first to assess.

It's longer than most, about 100 feet. But it's tucked between a large cement landing and some old cells. So you have to approach it directly, then spin to get onto it. Sadly, it took us a couple of attempts. The cement landing mucked with the current enough that inQuest didn't behave they way I thought she should. But we did get it done.

This was a big win, though. The dock is next to a park, which makes easy dog walking. And the only restaurant in town, The Derby Tavern, was open. So we got a cooked meal and a beer, which is nice after a long day.
We waiting longer than I like. In fact I was sure they forgot about us.
Turns out the drop is 34 feet. So it took a while to fill the chamber.

Posted by Jax Robertson at 6:25 PM