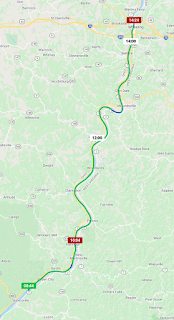 The day was pretty lax, all in all. We got up, had our coffee, ate some breakfast, and dingyed the dog to shore. By the time we got back our guests were up, they too ate, and we were on our way. Anchor came up clean, and the night was calm. Technically, we weren't in a known anchorage, so we felt like pioneers. Russ wrote up the anchorage in Waterway Guide to proposed it as a future anchorage for other boaters.

We got underway around 8:30. About 3 miles from the next lock, Hannibal, we hailed them. He replied, "Are you past the regatta?" We of course had no idea what he was talking about. Turns out the Coast Guard had the river closed for two miles between us and the lock. Once we cruised around the corner we could see big red buoys between us and the dam. The Coast Guard then hailed us and explained there was a regatta scheduled between 9 am and noon, at which point there would be a break and we could traverse the river at that time.

While I slowed our pace we started to look for a place where we could anchor and wait out the morning. We realized, on the Ohio side of the river, there was an awesome looking wall that had timber heads for lines and bounded what looked like a rest area. Turns out it was the Monroe County State Park, and specifically "Old Lock 15". It wasn't on any of our maps, but was a perfect place to tie up for the day (or night, if we knew we could have made it there yesterday).

We head for it, Russ gets a line on one of the timber heads, and I start sidling inQuest next to the wall, all of which was absolutely perfect -- no wind, great depth...

Leaving the anchorage, being told we can't get to the lock so we pull over,
then get the green light and into the lock we go!

Then the Coast Guard hail us again. They want to know how fast we can traverse the area. I told them 15 minutes. They said, "Go."

So, we pulled up the line and dashed away, heading for the lock. He already heard that conversation and was getting it ready for us. As we approached the doors were swinging open.

It's such a shame. The regatta happened in the town of New Martinsville, which also has a town wall/dock. It would have made a lovely stop, then we would have gotten to see the regatta. But not only was the old lock wall not on any of our documents, the town dock wasn't either. We didn't know they were even options. Largely that's because few do what we're doing, even fewer bother to note what's here. So we really are pioneers.

While cruising we were hailed by people who live in Moundsville, traveling the other way. They recommended we stop there, telling us which of the town docks we could use. They even offered to led us their car when they got back later that day. Sadly, when we got there we couldn't really make out the spot they recommended, so we went on our way.

We docked in Wheeling, on their town wall. As soon as the lines were secured, it started to rain. Serendipity!

Getting docked just before it pours.

Posted by Jax Robertson at 8:41 PM