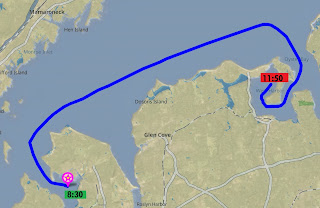 Yesterday we had some stiff winds as the once-hurricane moved out into the Atlantic creating some vacuums Mother Nature had to fill. We headed into town earlier in the day, around 9 am, taking the shuttle boat to shore. The tender operator told us we needed to be done by 2 pm. We all watch the weather when we deal with boats. We mailed a package, walked around the cute little town, then had a late breakfast/early lunch. We were back on inQuest by 11:30.

The bouncing was the worst when the current and wind direction differed. That led to a bunch of pitching. Once the tide changed it got much better, and as night came it all settled.

This morning you'd never know. Calm winds, calm seas. We got off the ball and headed back into the Long Island Bay. We needed to make some water which is a 2 hour process, so we slowed down to ensure that happened. Going far was not the plan anyway, just 1 bay over. The generator even started, taking this short voyage to recharge our batteries. Both were done by the time we dropped the hook.

There might be yet another windy and rainy day tomorrow so we anchored in a sheltered section of the bay. Once the anchor was down we headed to The Clam Bar for lunch. I haven't had fried clams in a coon's age. They were very good. But the show stopper were the Buffalo Calamari -- better then the chicken wing version, in my opinion.

The cutest thing about going to the clam place was that you dock on a floating pier. From there a tender picks you up to bring you to the marina/restaurant. That way all the boats are out of the way of the small but busy marina.

We plan on being here for a couple of nights, maybe going to a local brewery tomorrow afternoon, weather permitting.

Posted by Jax Robertson at 5:11 PM