Chesapeake City to Cape May, anchor 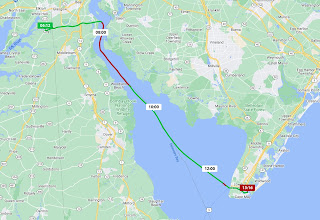 Up and out quite early today. Thunderstorms were predicted in the late afternoon but if we hit the bay early enough we should be anchored and set by 2 pm, long before they turn up. With thunderstorms can come some nasty winds, and with winds can come some nasty water. The Delaware Bay is sizable. We do not want to witness its nasty water.(Side Post entitled "Navionics Secretly Wants To Kill You, part 2"): We're onto its tricks now. Not long after leaving the pier I checked to see how we were getting onto the Delaware. And laughed. The route it recommended (the one it believed would save us some time) took us along the inside of a breakwater wall. It has a number of issues. A: it's an anchorage. While some folks don't feel the need to slow down for those, we do. B: it's shallow. So we'd go slower, making sure what our charts read and what we were experiencing were similar (it was NOT yesterday). C: it's behind a breakwater wall. At some point you need to return back to the bay. There is a teeny, tiny gap in the wall made just for that, but with a nearly 3 knot current, we'd turn sideways to it and that seemed like a terrible idea. This particular breakwater wall is a notorious boating hazard. It sinks 1 vessel a year on average. I am not making that up.

The voyage down the Delaware was fairly entertaining. At the start where the bay is the most narrow the water was calm. We ignored the villainous chart blotter and took a wider arch to get right into the channel. The current was going out, and it was ripping. We got 2 - 3 knots out of it, traveling over 11 knots. As the bay widened, however, the water got rougher. Not choppy, just tight swells. We'd go up one swell, then nose dive into the other. It wasn't consistent, but it was noticeable. Normally, we'd consider tacking to take the waves on the quarter bow rather than on the nose (we aren't fans of taking it on the nose), however...

We heard a sécurité call over the radio. A vessel announced they were leaving the C&D (the canal we were on last night) and entering Delaware Bay to head out to sea. Using one of our navigation apps I was able to pull up an image of that vessel. It was a car carrier. Side note: I cannot image what that would have looked like going by us while docked at Schaeffer's! He was about 4 miles behind us but doing 16 knots. Those things looks slow but they can move. It turned out, another freighter was already in the channel, about 3 miles behind us, moving at 13 knots. The two of them were working out how they were going to pass each other. Upon hearing that, us and all the other vessels in the channel started to move outside to give them both space. When big boats like that move at speeds like that, that implies massive waves and wakes. No one wants to be part of that.
That also meant we couldn't take up the channel wiggling back and forth in front of those guys. We just rode out the waves for the couple hours or so until the two ships passed us. And everyone else. By the time that drama was done the water flattened. We had some fog, we had some mist, but mostly it was a nice day to be on the water.
Once off the bay we travel on a small canal that cuts us over to Cape May. A small bit of drama there as we entered the canal in front of a ferry... moving at 11 knots. We figured eventually he'd slow down. Ferries, man, they have their routes wired. He did not slow down until he was docking. He about pushed us out of the way.
Meanwhile, I noticed floating wood in the water. Not wood, though, roundish. Like coconuts. But... this is New Jersey. No coconut trees here! Then I thought a dead turtles? But there were so many of them, that seemed terribly tragic. Then we realized... they were horseshoe crabs. Bunches of them! Floating along, right on the surface. For some reason I envisioned these things moving along the bottom of the ocean so the sight was stunning.
Dropped a hook, ate some lunch, took some naps, and showered. Now, we wait.
New York on Saturday. Still a go.
Posted by Jax Robertson at 5:41 PM