Saturday. And a glorious one at that. That means lots of boats on the water. Including us.
We left the marina early only to make sure we were in or around our destination by noon. We only had 4 1/2 hours to travel. After yesterday we were looking forward to a lovely day out. The Atlantic did not disappoint us again. We were waked by many, many fishing boats but the water itself was well behaved.
A couple of hours in we could see the New York skyline. Once we neared the channel we had a new game of "watch out for traffic" -- between ships, ferries, tugs, and tourists boat were zipping everywhere and in all directions. The fastest of those, the ships and ferries, thankfully use AIS so you could watch their whereabouts from the helm.
We did the touristy thing. Before we went to the marina we headed for Lady Liberty and took pics of ourselves. That was probably the most waked we got after ferries cruised by. 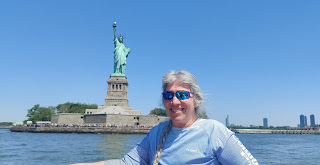 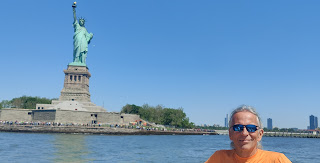 We then proceeded to the marina, wiggled our way down the fairways, and got into our slip. No wind, a little current, but ultimately no issues.
Then we promptly went to Grimaldi's for pizza.
Getting into the harbor, head to Lady Liberty,
then onto the marina. Most of the bounce
is from wakes.
Posted by Jax Robertson at 4:21 PM