Cape May to Manasquan, marina 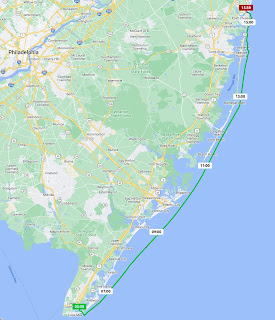 We planned on a short day today heading up into Atlantic City. There's an excellent anchorage there and we wanted to go back. It would have been about 4 1/2 hours away, making a nice day. Water was just fabulous too... 2 foot swells on a 6 second period, no real wind to speak of making the ride fabulous. Being ever vigilant on the weather both Russ and I did a quick check on the days ahead.

Turns out Saturday, the good day, was much less so, especially in the afternoon. Doing a short run today meant a long day tomorrow. That made us both less than enthusiastic.

The big problem with this section of coastline is the lack of bail out points. There are only 3 "grade A" rated inlets from here to New York: Cape May, Atlantic City, and Manasquan. There's another called Barnegat that's considered okay but you should do it on a slack tide. Others have existed but shoal in so quickly that the Coast Guard no longer maintain them. And, of course, anchorages are rarer still, which is to say "non-existent."

So if we do a short day, and tomorrow's not great, we'll have a terrible afternoon. Given the water and weather forecast were so wonderful right now we thought let's make the long run today. We were planning on putting in13 hours, going all the way to Sandy Point, the top of New Jersey.

We left Cape May at 5:45 am. About a half hour before reaching the Atlantic City inlet the wind picked up. Weather apps predicted an increase from about 10 am to 1 pm from 4 mph to 8 mph. It would come from the ENE and swing to south by 2pm.

They were indeed ENE, staying easterly. They never did move south. They were over 13 mph, and upwards near 20. Pretty much the one direction you do not want a decent wind from when on the east coast is, in fact, east. 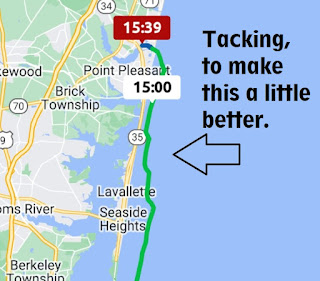 The bad water started around 9:30. But 2:30 I'd had enough. The swells increased in frequency and intensity. 3 - 4 feet on 4 second periods. Needless to say, we turned off at Manasquan.

Hoffman's Marina: it's about as expensive here as it will be in New York. The marina is right off the very busy channel so we're constantly being rocked (after today, it's nothing, but just some information for any of our boating friends). Diesel is no deal here, either. Also, there's a commuter train just a couple hundred feet away. Other than being a handy stop to pick up everything that's on the floor I can't say much about it.

Lesson learned: We've said it before, but never have long days. Even though tomorrow afternoon continues to look bad (and we'll be in New York before then!) we should have taken the short day and just dealt with tomorrow. Every weather app had it wrong today, even the different models some offer. So who knows what tomorrow would have really been like.

Such is boat life.

Coming into Manasquan. Note the change in camera
vibration. So good to be on calm water.
Then note all the boats sitting in the inlet fishing.

Posted by Jax Robertson at 6:23 PM