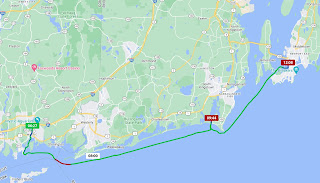 Only recently did Newport even come into my radar. That's largely due to the series The Gilded Age, which is the American version of Downton Abbey. All the well-to-do have a summer home in Newport.

While a bit windy the direction worked well for us, coming mostly from the north. The ride wasn't lumpy as a result, even though we clocked 20 - 25 mph gusts at times.

We weren't desperate for fuel but rumors were Galilee had some of the cheapest around. We stopped there first. This particular place is set up like a fueling station -- you back into a slip, they fill you up, you move out, and another boat is ready to take your place. Wind made that a little tricky but the slip was wide so maneuvering was simpler. Oh, $5.05 plus tax. Wee.Buddy boats are getting closer to us now. Bella Gatto is in the same bay, Narragansett, but at a yacht club visiting friends. High Wind is in the Hamptons and should be in the bay by the weekend. The Narragansett Bay is really large with lots of different anchorages and towns to explore. You can get to Providence from here, but we're told it's very commercial with no "small boat" anchorages or docks. We'll be here in Newport for 2 nights then we'll putter around a bit to see the sights.
We dropped the dinghy and went into town. Even though it's Monday clearly we're in "the season." Lots of bustle and crowds.

Posted by Jax Robertson at 6:08 PM