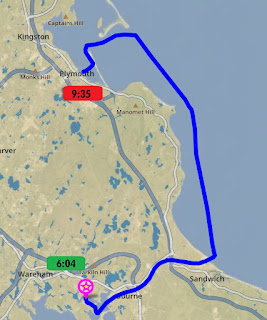 The day was predicted as amazing, and it was. We wanted to get through the canal early before a bunch of boaters clogged the water, and we did. Moreover, it timed out perfectly with tides. We got to the top of the canal pretty close to slack.

The hardest part about the trip today was the veritable slalom through all the lobster/crab traps on the bay. Since we don't know which (lobster or crab) we've been calling them "prop traps" as the issue is getting their lines fouled in our running gear.

We arrived early as a result, The marina was able to let us get on a ball anyway. We immediately took the launch into town for 2nd breakfast and some walking.
Plymouth Rock is a real thing. It's just a large rock that made it easy to find the harbor, a landmark, but not so big that it was some kind of sailing obstacle. It's been moved a couple of times but is now back in it's original location, safely surrounded by granite columns.

The cemetery is the burial site of the original pilgrims. Efforts have been made to preserve the original headstones by setting them in thicker granite stones.

Speaking of the Mayflower...

You can tour the boat, and we did. It did NOT smell of dead whale, which was a plus. The replica was build in England then sailed here to Mystic where it got it's last embellishments, then is came to Plymouth. It doesn't sail often since it's crazy costly, and crazy dangerous. The docent told us the last time it even left port was 2020. For those of you who boat, it has a Garmin chart plotter. Just sayin'.
Given the time period there is no record of what the Mayflower really looked like. They made the replica from knowledge that it was a Dutch ship (they based it on old blueprints of similar vessels) and a sparse description from the pilgrims.
Posted by Jax Robertson at 5:56 PM