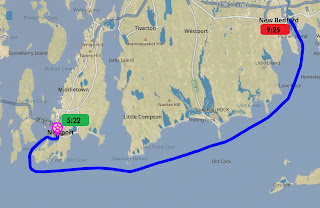 In watching weather patterns of late we've noticed that early, early mornings are the best time to travel. That's when the winds are calmest. We've recently touched based with friends who summer in Cape Cod, Bob Batterman and Lorna Blake, who we're trying to see this weekend. We took a 4 hour run to New Bedford to make some progress that way.While calm the winds were coming from the south. Once out of the Narragansett Bay we had 2 foot swells on the bow. Some were 4 foot, but none were terrible since they were spaced reasonably well. Once we made the turn to head east, however, the water fell to 2nd place of our concerns. At that time of day we were headed directly into the sun. Between it and the glare off the water even with strong sunglasses the travel was tough. Most of our energy was spent trying to see. Debris, crab pots, lobster traps, all these become more of a concern when your vision is limited.Thankfully, we didn't have any issues, just headaches from glare. While dealing with that the water calmed as we got behind the islands that bound Buzzards Bay. We experienced some chop once the tide changed direction. Otherwise, the trip went fine.Since we got in early Russ did an oil change on the engines. After, he had oil samples he needed to mail to a company that detects any metals that indicate wear or problems. So we called the launch (the shuttle boat) who took us to New Bedford. It was a quick walk to the post office, then onto the Moby Dick Brewery. Scott, the proprietor, stopped by to chat. He recommended a checking out some of the architecture in Fairhaven, the small town on the other side of the bay. We both had our walking shoes on so we did just that. And it was really worth the effort.


New Bedford impressed us quite a bit. After the bustle of Newport with its many-mansion walks this tiny town was more a town and less a tourist destination. It has lots of eateries and shops, but clearly it's a livable place with townsfolks. We like that more than ogling over the "lifestyles of the rich and famous."

Posted by Jax Robertson at 6:07 PM