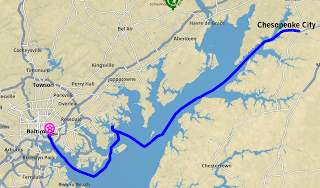 We headed out of Baltimore around 8 am this morning. While we didn't really need fuel we decided that, from here on out, it would be more expensive in New England. So we topped off at the cheapest fuel stop nearby. And even that was $5.50 a gallon. (Side Post entitled "Navionics Secretly Wants To Kill You"): When Navionics generated the route to Bowley's fuel dock -- always in an effort to save us time -- it routed us up a narrow channel between North Point State Park and Pleasure Island, south and west of Hart Miller Island. Given it was a new area for us Russ double-checked depths and ease of navigation. When we got to the tiny channel we had to slow down tremendously. Russ, at the helm, reported depths just over 1 foot. This was at high tide. Our review: Pleasure Island Channel, 1 out of 5 stars, "Wouldn't recommend."After fueling we took a more-or-less straight route to the main channel (dictated by millions of crab pots) and continued north. We're trying to plan out the next few days since Saturday looks optimal for going up the Atlantic into New York. Russ called Delaware City for docking the night but they were packed. They recommended Schaeffer's, which is a restaurant with a long pier for boats in the CnD channel. They had space, saying a number of boats cancelled on them. I liked this idea because the long pier runs parallel to the channel, so easy, easy on and off. Just like the rivers of last year.

And a handy restaurant for dinner. What more can you ask for?

This is docking at Schaeffer's. Once docked, note the
ripping current!
Posted by Jax Robertson at 6:30 PM