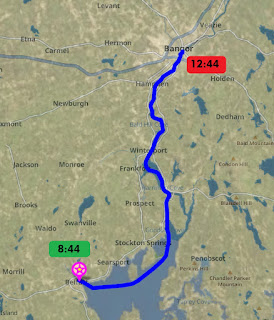 (In the back of my mind I hear Andrew Dice Clay saying, "Bangor?! I don't even know her!" I'm sure the Maine folks have never heard that one.)
We left Belfast and headed across the Penobscot Bay and up the river to Bangor. It's pretty much the furthest north you can get to by boat in Maine. The ride up was just beautiful, and it's been one of the longer ones we've had in a while, about 4 hours. We barely saw any other boats while on the cruise.
But have you ever just had a vibe? Things weren't going to go as you planned, and you continuing to force that plan is a lot like slow-boating against a strong current?
Upon arriving in Bangor we hail the town docks and ask for moorage. Turns out (while this is Monday) Tuesday night is a Jimmy Buffet concert, so they had no space for the next 2 nights. In other words, had we picked almost any other time this wouldn't have been an issue.
We're not daunted. There are a number of anchorages around so we pick one. We try it, but we can't get the hook to hold. Russ had read ahead of time that much of the area is scoured, leaving only rock which we can't anchor on. We move to another anchorage, nearer the casino. Hook grabs great! We're done and ready to nap.
As we napped we heard the sound check for the show. It didn't bother us but it was a clear sign we might not want to stay 2 nights as planned. We anchored in the "concert anchorage" so we assumed it would fill with folks wanting to be entertained, who may or may not know how to anchor. We altered our plans: we'll stay the night, do some errands tomorrow, then head to Bucksport Tuesday afternoon.
For dinner we took the tender to the town dinghy dock. Which is separate from the town official dock. We were the only boat there, sharing space with folks fishing, kids jumping in the water, and a "camp" in a nearby park. This didn't leave us with a warm and fuzzy feeling. We locked up the dinghy and ate at the brewery. Not a great meal but decent, yet hard to enjoy since we worried about the tender.
Enough time has passed now that the tide is well and truly out. While a river, the tidal swing here is 13 to 14 feet. When we got back to the boat we were less than 40 from shore (not well marked on our charts I'm afraid) with exposed rock. And we had 4 feet yet to go before the end of low tide.
We fired up the engines and moved closer to the center of the river and tried again. This time we dragged across the bottom. Raising the anchor to try again we had the added surprise of a heavy, thick cable snagging our anchor. Russ managed to free us with a boat hook, but he had to drop it from the weight. We rescued it and decided that was that. We turned and headed downstream.
This was round 7:30 pm. While sunny, the wind was blowing 15 knots or so up the river while the tide was pulling out. That made for some weighty chop. But our frustration was that Bucksport was 2 hours away. Neither of us enjoyed the thought of anchoring in an unknown place in the dark. Russ got out the charts and found a spot about 1/2 way there, just behind marker R24. That is where we dropped the hook. That is where we spent the night.
And it was one of the quietest, most peaceful nights we've had in a long time.
Posted by Jax Robertson at 5:50 PM