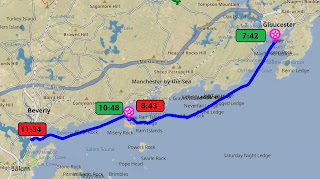 Officially we're in Beverly, right across the bay from Salem.

Among the "high points" of Gloucester was our dinner last night at Tonno Gloucester. This was an Italian place that also served seafood, and one of the best meals we had since our crazy night at Aragosta. We ordered muscles, raw oysters (which were $12/dozen for happy hour(!)), the risotto, and eggplant parm with a side of house made spaghetti. All of it was outstanding.

On the "low points" was the waking we felt right up until 10 pm, then started again around 4 am. Needless to say, we decided not to stay. 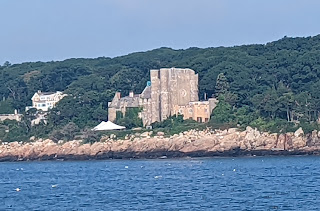 Among the things to explore in Gloucester are the
Hammond Castle...

I've been wanting to go to Salem. It was only an hour away so we'd get there before any harbor office opened. Rather than wait and be rocked, Russ found us an anchorage off Misery Island. We shot for that to hang out for a while.

The trip was just lovely; I love a calm Atlantic. We didn't have to drop a hook since were mooring balls were available. We grabbed one that looked big enough, deciding we'd move if the owner showed up and wanted it back. Russ made us a second breakfast of soft boiled eggs. Those are yummy.

As the morning progressed more and more boats filled the tiny bay. It was beginning to feel like "party city", and who could blame them given it was Sunday, sunny, and balmy. Lots of folks ready for a day of paddle boards, kayaking, and swimming.

Right around 10:30 we noticed a Harbor Master boat spin by. We hailed them and asked if there were moors in town available. They said they thought so -- it was first come first serve. We left the island and headed to the Beverly Harbor, where we grabbed a ball there.

Around 2 pm we went into town to check out a nearby brewery. We stopped first into to the harbor master to settle up. Turns out... free.

While in Beverly just is a sample of what we see
come by. This is a serious "no wake" zone, thankfully.
But the sheer volume of boats is impressive!

Posted by Jax Robertson at 6:02 PM