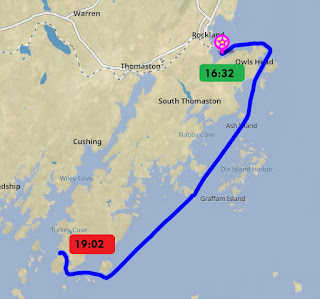 (subtitled: Last minute decisions made at 4:30 pm after 2 beers)

The crew of Highwind joined us in Rockland around noon. Once they got anchored we picked them up in the dinghy and headed into Rockland where, this weekend only, they were holding the Lobster Festival. We got in the lobster line, ate that with corn on the cob and slaw, then headed to the Fried Dough stand where we got desert. These were more like elephant ears but you get to heap them with whatever you want: powdered sugar, caramel, chocolate syrup, lemon curd, blueberries, custard, just to name a few options. With these in hand we walked to the brewery.

I left to use the restroom and when I returned decisions had been made that we were upping anchors now and doing just that. Within minutes ferry tix were bought (gotta love the interweb) and we were walking back to the dinghy. 30 minutes later both vessels were underway.

Right into the fog bank. It was perfectly clear on land.

The ride was 3 hours, but it was 3 diligent hours. Running lights on, fog horn blaring, radar intensely monitored, all while eyes were up and watching for prop traps that would dimly appear in the fog.

Another reason to go was, while we couldn't see well, the open water journey was very calm waters. The ride was very smooth, despite the lack of vision.

When we got to the anchorage this part of the water was clear. We could easily see our way through the mooring field. Highwind dropped her anchor first, then invited us to just raft to her.

And that's how we spent a very quiet evening.

Following them in the fog...

Posted by Jax Robertson at 9:07 AM