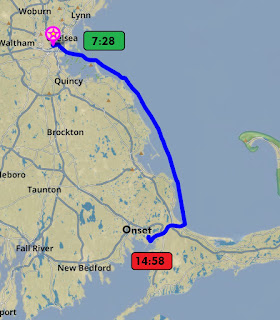 We left early in the morning from the Charles Gate Yacht Club. Due to the bridges and lock, even on a weekend, it still takes about 30 minutes just to get 1 mile. All that behind us we headed out into the Atlantic.
The sky was blue, the sun was warm, but the waters were a bit confused. Right off we had swells from a number of directions that made it tough to find a smooth ride. That continued for about an hour or so, hitting us on the nose, then beam, then back to the nose. Very bizarre.
Then we saw a whale! Again! And again, we didn't get a pic of the thing, which was tragic because this time I could have gotten a nice one. First, the water was churned (which you feel a LOT more when you're standing still) and second, we see it, stop, but coast past it before we can do anything. Thus, no photos. Probably our last chance, too.
As we traveled south the waters calmed. Most of the day, as a result, was dandy. Until around 2 pm when the winds kicked up. Right around that time we turned west to go into the channel.
Which was all kinds of crazy! We'd been told to avoid it on the weekends if we can. The length of the thing is a no wake zone with a 10 mph speed limit. But folks could NOT care less. There were big, fast boats tearing through there like they were in a raceway. Not only does that wake you as you pass them (or they pass you) but the wakes keep bouncing off the channel walls and back to you. With many boats doing the same thing, this turned into one of the roughest channel rides we experienced in a long time. Maybe the worst ever.
No long after leaving that rodeo we turned up a small channel to Onset. We stopped here on the way out about 2 months ago. Today, however, we were lured by the price of their diesel.
...and so were a hundred boaters. Good news travels fast.
So we jostle our way up to the fuel dock, fuel up, pump out, then have to duck and dodge our way back out to make room for the next wave of boats.
The day was long. We're not in a hurry but know windy days are coming this week. We'd like to spend them someplace protected. And, thankfully, traveling tomorrow is on a Monday.
This is throughout the canal and into Onset,
where we pumped out and fueled up.
The video is crazy with wakes from boats.
And TONS of boats! We were exhausted by the end of the day.
Posted by Jax Robertson at 8:33 AM