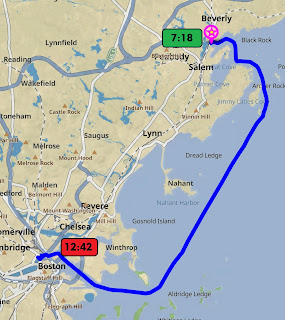 Not a banner ride. Weather was overcast but the water was reasonable. However, within an hour after leaving Salem we broke the belts on the port engine (which we discovered once the "Engine Hot" alarms went off).

We've done this before, traveled on 1 engine while Russ changed the belts. Back then we were in a bay, Today we were in the Atlantic and, while not awful, we had 2 - 3 foot swells. This wouldn't have been noticeable if we traveled at speed, but with only one engine we slowed way down to 5 knots. So we were tossed a bit as I tried to find some orientation that would still move us toward Boston while not taking everything on the beam.

That was a 45 minute delay. Which (unbeknownst to us at the time) would cost us 2 hours.

Turns out the Orange line, a commuter train in Boston, is down for a month. To make up for this they are running a lot of shuttles. And to ensure those run on time as much as possible the Craigie Bridge only opens for 10 minutes every 2 hours. Yes, we need to go under that. It's only 11 feet.

We got to the lock around 10:10 and were locked through pretty quickly. The next hurdle was the Tower A railroad bridge. Of course, while the bridge master tried to get us through quickly, the trains were an issue. We didn't get through until 10:37. We got to Craigie bridge right at 10:40. And they would not open. Even though they hadn't opened at 10:30 at all. Seemed unfair.

So. Unwilling to drop an anchor here (who knows what old cables, pipes, or debris is below us) we stood station. For 2 hours.

Not a great day on the water.

On the plus side, while waiting for the bridge we were
entertained by "the Duck Parade."

Posted by Jax Robertson at 5:14 PM