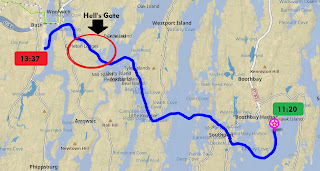 Last night we took a long dinghy ride around Spruce point, going from our ball to the Boothbay Lobster Wharf, which was about 3 miles. Hannah and David met us there, and we enjoyed the outside lobster eatery. Then we dinghy-ed over to the Wannawaf, which sells waffles and ice cream. Together. As an awesome sundae! Returning back to inQuest it was a perfect night for a long dinghy ride; almost zero wind, no waves, and not too cold or wet.
Ever since he heard the name Russ has wanted to do Hell's Gate here in Maine. If you time it correctly with tides, it's not a big deal. Get it wrong, and you're dealing with standing waves, swirling water, and massive tides while in a very narrow and rocky channel. We, being somewhat seasoned, timed it just fine. There was a little "shooting rapids" involved but no unexpected or dangerous situations. Russ was out on the bow, making sure what we saw on the charts (depth and rock locations) was, in fact, true.

We sidled up to the one-and-only mooring ball the Maine Maritime Museum had, right around 1:30 pm. We took naps, then headed into town to try the brewery, The Bath Brewing Company. Russ had a flight, me a Hef, and we had some salads as a late "linner", which we call a late lunch/early dinner in the boat world. Great brews! Brought some home, which we hadn't done since Newport.

We camd back to the boat just as the ebb was fullest, around 3 knots. Looked pretty intense to me.

Going through Hell's Gate... as speed, but you
can see us zig and zag through the narrow channel.
On the ball in Bath...

Posted by Jax Robertson at 6:31 PM