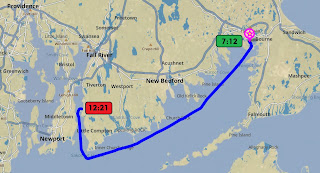 Not too far behind us yesterday was Highwind. After we fueled up so did they. We then rafted together one of our favorites ways, bow to stern. We dropped anchor and set, then they dropped anchor behind us and back up. Once next to us we tied off together, their bow on our stern, ours on theirs. That way one of us was the anchor when the tide was coming in, the other the anchor when the tide was going out. It's especially handy in tight or crowded anchorages since there's no spinning.That morning they left from Boston as well, after flying in from Cleveland on a 6 am flight. Like us they were beat. We ate some homemade peanut butter cookies, played an quick game of Hanabi, then we all crashed.

Both of us were underway around 7 am. The plan was to get to New Bedford. They had to make it a quick day to get to work. But the water was amazing -- so much better than anything yesterday. Russ and I decided to press on and get to Sakonnet River.

When we came up this way a couple of months ago we moved pretty quick to get to Maine, passing up some exploring opportunities. Narragansett Bay was one of those opportunities. We came and got on a ball in Newport, but didn't do much else. Given weather is gonna be pretty crappy the next couple of days, hiding out in the bay will be awesome.

Heck, we might try to make a run up to Providence.

The splashing got my attention.

Posted by Jax Robertson at 3:11 PM