Now that Maine is behind us I want to review some of what we learned. Note: Largely this is for me so when we go back can plan appropriately).

Throughout the loop you're told you are responsible for your own wake. You'll hear other boats remind (yell) that over radios. And for the most part, people behave themselves by slowing down as they pass one another or asking for a slow pass on the radio. Not here. There is no hailing, there is no courtesy. Radios aren't used much at all, in fact, unless there's an emergency. If you're on a ball or anchored, boats will come zipping by without regard. If you try to express your anger, you will get laughed at. So, batten down your hatchets 24/7, day or night, because you certainly will end up with food from your fridge or dishes from the cupboards on the floor.

Much like crap pots, lobster traps abound. Once you leave Portland and head more north, the density becomes insane. Be aware that some of them have 2 floats per trap, so while you're weaving between traps, DO NOT weave between those.

Heading up north is also heading east. If you're like us you want to travel as early as possible to get the best weather you can. The problem is the sun in your eyes, and the glare off the water. This can make navigating those fields of traps a huge effort. We had a variety of sun glasses to help deal, some with darker lenses for those "in the sun" days.

Tides are quite a thing up here, mostly between 8 and 10 feet. This can make anchoring or using your dinghy on a beach a problem. We have an app that tells us what the tides are and when they are. As a result, if we're anchoring, we make sure to add enough rode for the high tide. As for using a dinghy, we got ourselves a bungee anchor line. This will help keep the tender in water as the tide changes.

While we had little incidents fog can be a big thing up in Maine. Bar Harbor is also called "Fog City" for a reason (altho I tend to think of San Francisco as that, but that's the west coast thing). We recommend Doppler Radar to help with foggy journeys. We also use a fog horn, AIS, and yellow-lensed sun glasses. Those always help.

AIS is used way more up here than anywhere down south. We love that.

Mooring fields are a big thing up here. Marinas are extremely expensive and probably tough to maintain given the weather. Not only transients, but many locals keep their boats on a ball, some all year 'round. As a result the dinghy docks are just stuffed! Be ready to move some of the boats around when you are trying to land your tender. Also, make sure you give a long line on your dinghy so others can do the same. 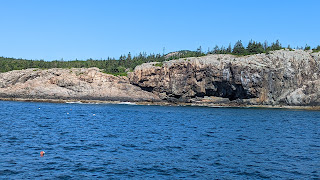 But SO Worth It

By far, some of the best vistas we had were in Maine. On the loop, the only area we can think of that's comparable is the North Channel in Canada. Originally we were a bit nervous about the rock up here, but the charts are accurate. Follow them, and you'll have a ball. 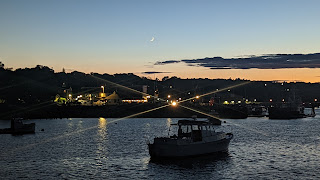 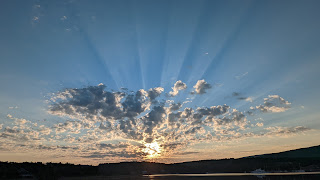 We sure did.
Posted by Jax Robertson at 2:21 PM