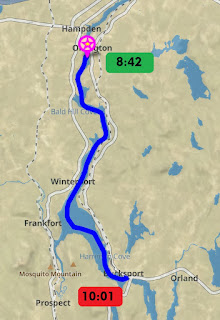 Given last night's decision to head south today's trip was only 1 hour or so. Leaving was perfect -- anchor came up nice and we caught the end of the outgoing tide. In Bucksport there was no ball to be had so we dropped the anchor nearby. That, too, went swimmingly.

When we were in Belfast, David (of Highwind) helped Russ set up the our alternator for recharging the lithiums while underway. Up until now we'd only recharge the batteries with solar, the generator, or being plugged in at a dock. Additionally, many moons ago when we first bought inQuest, we installed a big, honkin' alternator. But that alternator was never set up to charge the lithiums when Russ converted the system. Until now.

He'd still working out some kinks, like keeping the system cool and moderating the charge. So once we got settled he played with fans and settings. Once this works we'll be charging up as we run. We may not need to get near land or run the generator again!

We also took a quick run into town to eat some pizza. We're thinking we'll check out the fort tomorrow and do some grocery shopping as the very convenient grocery nearby.

Posted by Jax Robertson at 8:46 PM