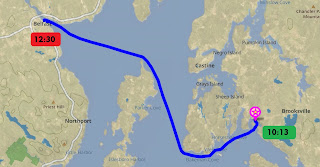 Last night, in Bucks Harbor, was one of the quietest nights we've had in Maine. The marina was nestled behind an island so wind wasn't a factor but also there were no workboats there. We didn't get waked at all. Great night's sleep.

We'd planned to have packages and mail sent there. The packages were waiting for us, but the mail was missing. It was important stuff, too -- the dinghy registration and our voting ballots. Apparently they don't receive the mail there. Instead they have to go pick it up at the post office. We waited, got our ballots but the registration remains missing. Thus the later departure.

I'm bummed because the GoPro wasn't working for the first half of the ride, which was weaving in between a number of awesome islands. Great trip, overall, and lasted about 2 hours. Before getting a ball we fueled up, pumped out, and topped off the water.

Highwind joined us a couple hours later. The 4 of us went out to the local brewery -- because that's what we do! -- then off to get dinner. Being Saturday night, things were pretty busy in the town. We tried the Italian place (45 minute wait), the Thai place (no more seatings tonight), then settled on the sushi place, which only has seating at the bar. But that worked for us!

Posted by Jax Robertson at 9:18 PM