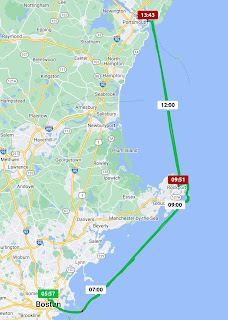 After almost a week in Boston (so awesome), which included almost nightly fireworks, we headed out this morning. Still partial to the shorter days we'd been doing we set our sights on Rockport. The weather was going to get blustery in the afternoon so we wanted to be set long before then.

While on our way to Rockport Russ called the harbor and reserved a ball. Once we got into the harbor we hailed them to get instructions. After a little bit of conversation they said, "You failed to mention you were a catamaran."

"That still makes a big difference."

We've never had anyone complain about that before. They put us on a moored platform, which I thought was nifty. But with bad weather coming I grew concerned that we'd pull out or damage the thing, largely because of that comment. We did a quick assess of the weather and absolutely everything changed. It looked like we might have anywhere from a couple of days to a week and, while cute, I wasn't sure we wanted to spend a whole lotta time there.

Maps out we went over some other places to go. Portsmouth was only another 3 hours away. We cancelled our reservation in Rockport and ran.

While a soft rain was coming the winds remained calm. The water went from gentle rollers to silky flat as we traveled. The farther north we went the better it got.

We got into Portsmouth just before 2 pm. I just hated it. The yacht club we used (on the New Hampshire side) was right off the main channel. Apparently there is no "no wake" area there, which was only part of the problem. Mostly, these fishing vessels were flying by at 15 knots about 20 feet off our boat. We were more that waked... we were bouncing off the initial bow waves. It was just crazy.

Another quick phone call to the yacht club across the way on the Maine side, in Kittery. Yep they had space. So we moved.

In one day we turned our engines on 3 separate times. But we're now in Maine. So, hey.

Posted by Jax Robertson at 5:17 PM