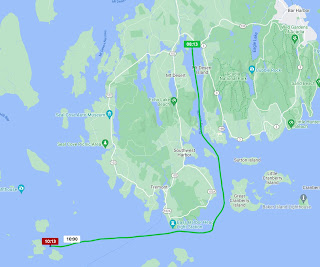 Once the sound opened up to the Atlantic we had a bit of swells on the bow at higher frequencies than we like. But we didn't have far to go, and once we turned the corner and headed west the islands blocked that small bit of nastiness. So, most of the ride was wonderful. Just about 20 minutes of "Ugh!"

The anchorage Russ picked was nestled in between 3 islands. The views are lovely. But Bella Gatto, en route to Northeast Harbor, took a photo of us as they passed by.

We dropped the dinghy immediately to see for ourselves. At first we saw a few on some rocks, then it we realized they were everywhere. We stopped at a couple of different locations for pictures and movies. There were at least 20 in the first stop and another 15 in the second. There were even a few near the boat.

That made for a grand day out!

Here's the trip up Somes Sound yesterday.
When we get started we pass a sailboat. Then, as we
wait for a tacking sailboat, the first one passes us
on the right... so we have to overtake him again.
Lastly, the cruise here. Pretty out through the fjord,
then watch for "the cut off" (peanut-head!).
And lots and lots of prop traps!

Posted by Jax Robertson at 8:28 AM