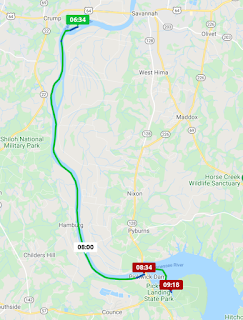 The best thing about yesterday's long day was today was very short. It included a lock, too. When we got up we checked our AIS information to see if any tows were near or using the lock. It looked clear, so we quickly weighed anchor and headed out.

Still a slog. The closer we got to the lock and dam the slower we went. At times we traveled around 5.9 knots.

We hailed the lockmaster about 2 miles out. They were still dumping the chamber when we arrived. There are 2 at Pickwick and, giving the raging rapids of the dam, I wanted us near a door and out of the current. But we only saw the signal for the large on. Russ hailed for confirmation of which chamber we'd be using. The big one! We hadn't heard that the small one was broken so we guessed they were trying to dump water so using the big one whenever they could. We had the large chamber all to ourselves.

Russ picked this anchorage, Pickwick Landing, for a number of reasons. First, it's small and should shield us well from any Ida remnants. Second, it's very near a marina, which makes walking a dog much easier.

So far the weather's been calm. Mostly misting rain, no down pours yet, and no wind to speak of. No lightning, no thunder. The weather apps all tell us it will be mostly tonight. We put out lots of rode, just in case.

That was so unusual Russ took a quick movie.

Posted by Jax Robertson at 5:42 PM