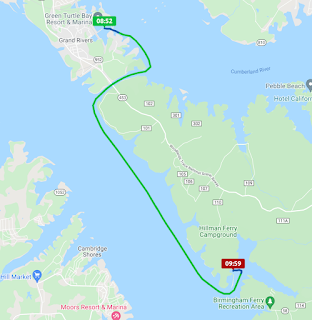 Despite the heat advisory in affect we thought, after spending 9 days in a marina, we'd anchor out a couple of nights. Kentucky Lake is really pretty and we really didn't want to rush travel down it. Between the new batteries and all Russ's electrical upgrades, we stayed cool all day.

We traveled about a hour to Pisgah Bay. Several years ago when we RV-ed we stayed on this same bay while visiting the Land Between the Lakes. From our campsite we saw boats anchored on the bay, wondering what that life was like. Just fast-forward about 5 years... 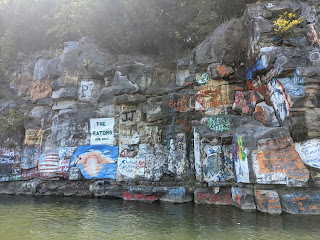 Not just hot out but humid. As a result the lows in the evening aren't that low. This will continue for another couple of days.

The overall play is to take our time a bit. We have an appointment in Huntsville where Russ's son will join us for a spell. So we have a bit of time to kill. Besides, with the massive flooding they experienced in Tennessee last week all that detritus is making its way down river. We'd like to avoid that too if we could.
Btw, the new chair is AWESOME.
And for those curious about Russ's tech upgrades, while in Green Turtle Bay he had a new switch delivered as well as a digital panel for autogenning our generator.
The switch he installed to easily turn the batteries on and off. Prior he had to disconnect cables, which itself wasn't a thing, but reconnecting them made a spark, which he wasn't wild about. Now it's just a switch on and off.
Our generator is now getting a lot of use. But it is mechanical. We have to turn on a little heater for a few seconds (more if it's cold) then push and hold a switch to start the thing. After a few minutes, letting the motor warm up, we flip the power so it charges the batteries. Low tech. Russ is a high tech guy. He installed an electrical panel to fix this. I can affirm it works so far -- not only can he turn the generator on and off at the panel but today it auto-started when the batteries got to around 40%. The last step in the conversion process is to have the power turn on a couple minutes after the generator starts and off a couple of minutes before it turns off.
I told Russ if we stop doing the boat thing we need to live near a working marina. He should become a boater handyman.
Posted by Jax Robertson at 7:46 AM