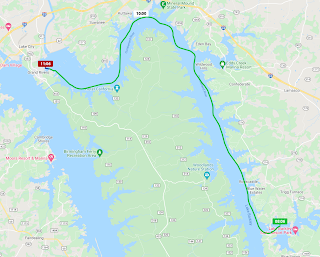 Short day. We weren't trying to get here so quickly but between the current and some packages waiting for us at the marina (more later) we thought we'd expedite the trip. Moreover, we'll get a little more time on Kentucky Lake next week, which should be better anchoring (judging by the anchoring we did there a couple months ago).

At the Little River they put us in what they called a "house boat" slip. There was a house boat next to us. It was about our width but twice our length. Docking in the slip was like a small river cruise all its own.

Cloudy day again, but no rain nor wind. We got docked, stern in, by 11:30 am. First thing we did was pick up our new captain's chair!

About 3 weeks ago we realized the chair wasn't working properly. The seat back wouldn't secure, so if you leaned back it would go back. After a quick investigation Russ discovered one of the supports was broken. So, the search for a new chair went from a "want to have" to a "need to have." Someone had mentioned LleBroc, and their website has nifty stuff. As we traveled we pointed and clicked on the website and ordered a new chair.

Here's what's odd. These are not cheap chairs. They aren't the most expensive, either, but they are pretty pricey. If I owned that company, and we got a totally out-of-the-blue order from anyone, I'd have my people contact them and say, "We're thrilled you've chosen us! We'd like to ensure you're getting exactly what you want" and spend 10 minutes with that costumer.

That did not happen. Thankfully they did send an invoice with a "look this over and make sure it's right" note. It wasn't. I called them, and then we worked it out. Frankly, I'm astounded it worked out as well as it did. At one point I was on my hands and knees measuring the diameter of our post.

The second little issue was shipping. I told them we were underway and they needed to contact me for a shipping address when the chair was ready. They called on the phone to get the address. They sent a follow-up invoice that it would be shipped on Aug 15. Then we got another note saying it had been delivered. Aug 13.

When you want something quickly it never happens. This was so fast we didn't even give Green Turtle Bay (the marina we shipped it to) a heads up it was coming. Thankfully, they received it and put it in the garage with the attitude "someone will come looking for it." It was waiting for us when we got here.

The third issue was, again, not a cheap chair. It was in a huge box and wrapped in sheets of Styrofoam. No bubble wrap, no support Styrofoam pieces. In fact, the chair had lots of space to move back and forth in the box, and it did. The box, while wrapped in cellophane, was nearly falling apart once we took possession.

So, I dunno. Looks awesome, feels awesome. We're looking forward to using it next week when we get underway. I'm hoping the chair itself is better made than the company is run.
Posted by Jax Robertson at 6:54 PM